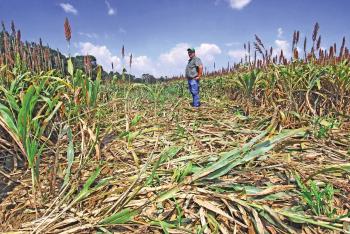 The growing feral hog population is causing millions of dollars of damage to agriculture across the southeastern United States. Because they are intelligent, difficult to control and have an appetite for just about anything, the hogs can quickly wipe out fields of crops along with farmers’ investments.
Phil Elzer, LSU AgCenter program leader for animal sciences and natural resources, said there are a total of about 10 million feral hogs living in 38 states. They have become a major issue in the South — about 500,000 feral hogs live in Louisiana and 2 to 3 million live in Texas.
“They eat anything — you name it, they’ll eat it,” Elzer said. “They just root through and eat anything they can.”
Elzer said the range of the feral hog population expanded when recreational hunting clubs began trapping hogs and transported them elsewhere to hunt. Feral pigs can be traced back to domestic hogs that escaped enclosures and quickly adapted to living in the wild, he said.
Elzer said feral hogs carry pathogenic bacteria as well as pseudorabies, an often-fatal viral disease that affects dogs, bears and other wildlife. Hogs can infect cattle and humans with brucellosis, a highly contagious disease that causes fever and muscular pain. Hunters should wear gloves when cleaning hogs to avoid infection.
Ricky Kilpatrick, an extension agent in Bossier Parish, said the feral hog problem has been going on for about 10 or 15 years. It is staying the same or even getting worse in areas, much like an invasive plant species, he said.
Kilpatrick, who has been hosting workshops on trapping and killing hogs, said farmers, timber landowners and homeowners are all dealing with feral hogs.
Feral hogs are wreaking particular havoc on corn farmers, Kilpatrick said. The hogs eat the seed corn, destroy plantings and eat the corn once it is grown. They also root up and eat tree saplings, which is devastating to the forestry industry in northern Louisiana.
The hogs are even causing problems for deer hunters and the people who lease their land for hunting. Kilpatrick said feral hogs not only eat the acorns that deer eat, but sometimes also the deer themselves.
Don Reed, a professor at the Bob R. Jones-Idlewild Research Station in Clinton, La., said feral hogs also root up the ryegrass people plant for cows.
People are using all legal control methods — trapping and shooting — but that still is not making a big dent in the population, Reed said.
“If you leave one or two out there, they’re such a prolific breed they’ll come back on you in a short time,” Reed said.
Elzer said between 75 and 85 percent of feral pigs would have to be eliminated to be able to control the population size. A sow can have up to two litters of six piglets every year.
Feral hogs are also intelligent, which makes it difficult to trap many of them at once, Elzer said. When the hogs see other hogs get trapped, they learn to stay away.
Elzer said the AgCenter has received a grant to explore ways to reduce the hog population such as an oral bait containing a chemical like salt.
For now, though, trapping is the primary control method. Kilpatrick said it is best not to set a trap immediately. He recommends using a deer camera to monitor hogs as they become comfortable going in and out of an open trap, then baiting it.