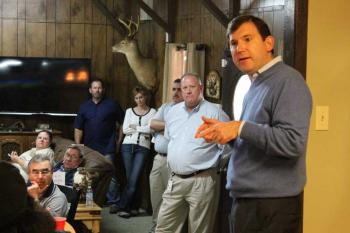 Lafayette Chamber of Commerce President Jason El Koubi, right, talks about the need for Evangeline Parish to join a seven-parih regional organization in order to consolidate resources and advance the region’s economic development efforts. To the left of El Kouba is Mark Suellentrop, facility general manager at Cabot’s Ville Platte plant, who arranged for El Koubi to speak at the special meeting of the Ville Platte Chamber of Commerce.

A special meeting of the Ville Platte Chamber of Commerce, held at the newly renovated lodge at Cazan Lake on Monday, December 15, was called to hear the president of the Lafayette Chamber of Commerce explain why a more unified approach to economic development is needed in the seven-parish Acadiana region.
Cabot General Manater Mark Suellentrop, who requested the special meeting, introduced Jason El Koubi, the Lafayette chamber president. Suellentrop said other regions of the state, for example in the New Orleans region, with 10 or 11 parishes, and the Baton Rouge region with nine parishes, are already reaping the benefits of regionalized economic development efforts. He said the Acadiana region has fallen behind in regionalized economic development projects.
Suellentrop said he and other Acadiana region unified economic development advocates have been developing a five-year economic development plan that will cost $3 million per year and they are trying to get the plan kicked off at the beginning of 2015.
El Koubi said the regional organization has gotten commitments for $2.5 million per year to fund the five-year plan. He also said Suellentrop has agreed to serve on the board of the new organization.
The Acadiana region is the only one in the state that doesn’t have a full-time lobbiest in the state Capitol, El Koubi said, adding there is “a tremendous amount of work to be done.”
A regional workforce development plan should be developed, he said, and the “training and the pathways” to stronger economic development efforts should not be done at the local level because workers tend to move around within the Acadiana region.
Ville Platte Chamber of Commerce Executive Director Camille Fontenot said other regions “have so much more” financial resources than Evangeline Parish and other parishes in the region.
El Koubi said “parishes that are not rich need a regional approach,” to attract businesses and industry.
State Representative Bernard LaBas, also at the chamber meeting earlier this week, said a lot of the expansion of job opportunities are tied to ports along the Mississippi River and along the Gulf Coast. He said the Acadiana region has a suitable workforce and the available land for industry to locate or expand, but “We need some roads.”
El Koubi said a regional approach is what parishes without a lot of financial resources need. That involves hiring a regional economic development professional as well as coordinated efforts of the chamber of commerce and economic development leadership in the seven-parish Acadiana region.
Anita Fontenot, whose family owns the lodge where the chamber meeting was being held, along with the Hatchery and other businesses, said the surprisingly high turnout for the special meeting is strong evidence there is a lot of local interest in economic development. She said while Evangeline Parish may lack financial strength, it is rich in knowledge, commitment and talent.