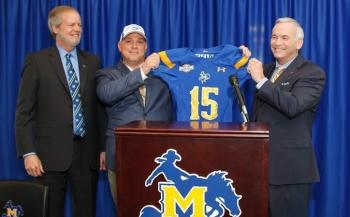 New McNeese head football coach Lance Guidry (middle) poses with president Dr. Phiilip Williams (left) and athletic director Bruce Hemphill (right). Guidry holds up a jersey with the number 15, representing the number he wore as a player at McNeese. Guidry, a 1995 graduate of McNeese, was the defensive coordinator at his alma mater for the past three years. (Photo courtesy of Raymond Stewart)

LAKE CHARLES – Lance Guidry wore No. 15 when he was an All-Southland Conference defensive back for McNeese State University back in the early 90s. On Wednesday, he was named the 15th head coach in school history while challenging the several hundred in attendance to “Cowboy Up.”
“There is a term that we call ‘Cowboy Up’,” said Guidry in front of a packed group consisting of family, friends, former teammates, former players and supporters. “When you ‘Cowboy Up’ you have to be tough and get back in the saddle as they say. I look at it as let’s go. It’s time for everyone to ‘Cowboy Up’.”
That brought a rousing cheer from the fans.
Guidry, whose contract is pending approval by the Louisiana System Board of Supervisors, is a 1995 graduate of McNeese. He replaces Matt Viator who left to become the head coach at Louisiana-Monroe.
“We are very pleased to announce that Lance Guidry has agreed to become the head football coach at McNeese State University,” said Bruce Hemphill, McNeese Director of Athletics. “Lance has done a terrific job as our defensive coordinator and assistant head coach.”
“The defenses he’s headed up have been some of the best in the Southland Conference, and this year, among the best in the nation. He’s a proven winner everywhere he’s been. He’s an exceptional motivator and understands the pulse of the team.”
“Lance cares about what the players do not only on the field but also in the classroom. He is the right choice to lead this program going forward.”
“Coach Guidry has impressed me with his passion, his intelligence and his love for his alma mater,” said McNeese President Dr. Philip Williams. “It has been a pleasure getting to know him since his return to McNeese. He has proven himself as a successful defensive coordinator and I believe that he will bring that drive to his head coaching duties.”
In 2015, Guidry helped McNeese win its 14th Southland Conference championship, a league record, while the team posted a perfect regular season.
His defense ranked 12th nationally in total defense (allowing a tad over 300 yards per game), third in both scoring defense and red zone defense, and fourth in rushing defense.
In addition, the Cowboys’ defense ranked second in 4th-down conversion defense sixth in first downs defense, and seventh in 3rd-down conversion defense.
“This is an established program but we need to get back to a dominant one once again,” said Guidry. “This season was a great start. It starts with personnel in our program so it will start with our staff. We have a great staff now but I don’t know who will be with me or who wants to leave. The ones who are here with me are going to ride with me, I promise you that.”
McNeese will represent Guidry’s first full-time head coaching job at the collegiate level. He acted as interim head coach at Miami University (Ohio) in 2010 and Western Kentucky University in 2012, leading both teams into postseason bowl games.