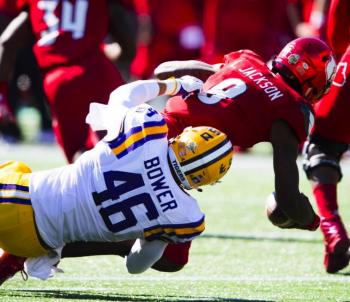 ORLANDO -- Not only has the Ed Orgeron era at LSU begun, but it has begun in a huge way, as the Tigers put a stranglehold on the Louisville Cardinal’s offense en route to a 29-9 Citrus Bowl win here Saturday.
The LSU defense was relentless in their quest to hold back the vaunted Louisville offense that came into the game averaging over 45 points per game and 550 yards per game.
The “Terrors of Tigertown” held the Cardinals to zero touchdowns and 220 total yards of offense, surrendering only three field goals on the day. Louisville was stymied all day long on the one down that counted, as they were two for 17 on third down conversions.
On top of that, He isman Trophy winner Lamar Jackson was rendered nearly invisible. The sophomore duel-threat quarterback managed only 33 yards of rushing on 23 carries and was 10 for 27 for a meager 153 yards through the air.
Meanwhile the efficient LSU offense executed the game plan effectively, gaining 394 yards of total offense with 177 of the yards coming on the ground.
Citrus Bowl MVP Derrius Guice ran the ball 26 times for 138 yards and one touchdown; a 70-yard sprint mid-way through the third quarter.
Quarterback Danny Etling did what was necessary to keep the Tiger offense on track, as he threw for 217 yards and two touchdowns. Etling completed 16 of 29 pass attempts.
Things did not start out on the right track for the Tigers. LSU won the coin toss and elected to receive the opening kickoff.
The Tigers immediately tested the Louisville secondary with a 36-yard pass from Etling to Malachai Dupre reaching the Cardinals 37-yard line.
Following a first-down run by Guice, a pair of incomplete passes and a missed 39-yard field goal try by Colby Delahoussaye left LSU without any points.
Louisville opened their first possession with an initial first down, but were forced to punt after failing to make the needed yards for another first down.
The Cardinal punt was lost in the sun by Tradavious White and downed at the five-yard line. LSU could not manage to get enough yards to sustain the drive and was force to punt the ball back to Louisville.
The Cardinals capitalized on the good field position and were able to kick a 24-yard field goal with 7:24 left in the first quarter. That would be the only score in the initial period.
After exchanging punts, LSU took over possession at their own 48-yard line with 3:35 left in the first quarter.
Seven plays and 52 yards later, Etling hit tight end Colin Jeter in the end zone for a one-yard touchdown pass on the first play of the second quarter.
The extra point was good and the Tigers led 7-3 with 14:54 left to go in the half.
LSU was not done scoring in the second quarter. After forcing another three-and-out, the Tigers took over the ball at their 21-yard line.
LSU then proceeded to go on a 13 play 79-yard drive that ate up 5:45 on the clock and resulted in a one-yard touchdown pass from Etling to Guice. Delahoussaye tacked on the extra point and the Tigers led 14-3 with 7:47 left in the second quarter.
LSU would add to their lead late in the second quarter when Arden Key sacked Jackson in the end zone for a safety.
Louisville was able to get on the board once more right before halftime. Following an interception on a pass Etling intended on throwing away, Louisville managed to tack on a 47-yard field goal as time expired for the half, cutting the Tiger lead down to 16-6 as the two teams headed into the locker room.
LSU picked up a pair of scores in the third quarter of play. The first score came with 8:48 left in the period, as Guice broke free and sprinted 70-yards for the score. That touchdown and extra points gave the Tigers a 23-6 lead at the time.
The other score for LSU came on a 42-yard field goal off of the foot for Delahoussaye at the 3:04 mark, extending the Tiger lead to 26-6.
The final quarter mirrored the entire game, with the LSU defense continuing to choke the life out of the Louisville offense.
The Cardinals did manage one more field goal at the start of the fourth quarter, this time from 30-yards out to bring the score to 23-9.
However, the Tigers added the final blow with a 25-yard field goal from Delahoussaye three minutes and five seconds later for the final points of the game.
LSU finishes the season with an 8-4 record, while Louisville drops to 9-4 on the season.