Thomas lives dream at LSU-E; has huge opportunity for ring 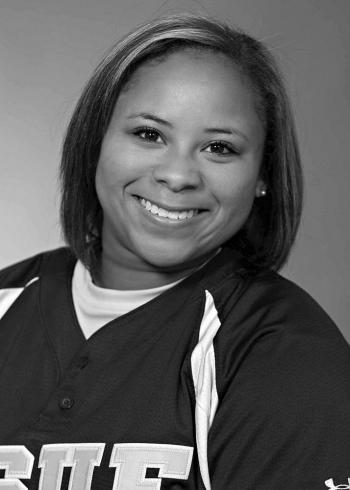 Former Mamou High and current LSU-E catcher Logan Thomas is pictured above. Thomas and the Lady Bengals will play in the NJCAA National Tournament this week. (Photo courtesy of LSU-E)

Former Mamou standout catcher Logan Thomas, the daughter of Gregory and Lisa Fontenot, has been living a dream the past year, playing softball on the college level.
Thomas, a star player for the Lady Demons, got the opportunity to be part of one of the premier programs the National Junior College Athletic Association and has made every second she has been on the team count.
Thomas has seen limited action, playing in three games and getting three at bats. But it is the experience of being able to be part of a great program that has Thomas fired up.
“I am so excited that I have been given this chance to continue playing softball,” stated Thomas. “Especially at this school. LSU-E is a winning program and we have the opportunity to win another championship. It feels really great.”
LSU-E will play in the NJCAA Division II National Championship Tournament this week in Clinton, Mississippi beginning yesterday.
Thomas’ journey to her place on the team began in the fall. She walked on after speaking with head coach Andy Lee and was subjected to an evaluation from the LSU-E coaching staff.
Thomas impressed the coaches enough that she was placed on the fall squad and given the chance to battle for a spot on the spring roster.
The hard work and daily grind Thomas endured paid off in the long run, as Lee gave her the news after the last fall game; she had made the spring squad and would be able to dress out with the team and get a chance to battle for a starting spot.
“Coach Lee came up to me after the last game in the fall and told me that I had earned a jersey,” said Thomas. “It was an amazing feeling that I would have a number and would be one of only 22 players that would get to dress for the games.”
“I worked extremely hard to get to that point,” Thomas continued. “I had to learn not to be lazy, because in high school I could kind of get away with it. But in college, if you don’t work hard there is always someone there to take your place.”
Thomas was a little weary about playing softball on the next level because of her major and the time it would consume in her everyday activities.
“I’m majoring in nursing,” commented Thomas. “So, in the fall, I kept saying to myself I don’t know if I can play softball and devote myself to my studies. When you are in the nursing program, it requires a certain GPA to stay in the program.”
“But, this spring I learned how to adjust to being a student athlete,” Thomas elaborated. “I had to learn not to procrastinate. Also, all of us on the team help each other out; especially the older players. They show you how to manage your time and help you get through those tough times because they have been there.”
One thing that Thomas has learned from playing for the Lady Bengals this season is how to be mentally tough.
“In high school, you don’t play as many games as you do in college,” stated Thomas. “The mentality has to be way different in college. It is a battle every day to make sure that you take care of your business before practice. You also have to be disciplined with your studies, because you are having to do homework on the road.”
Even with Thomas relishing every moment she has had so far this season, when asked if she plans to continue playing softball after her two years with LSU-E is up, Thomas is still not sure what direction she will take.
“If I had to say now, I do not think I would want to continue playing college ball,” said Thomas. “I really want to be a nurse and when you get into the third and fourth year of the nursing program, you really have to focus on your studies. But, if the situation is right and I feel I can handle being a student-athlete, I may just try.”
One thing is for sure, Thomas has her priorities in line. And, even if she does not move on beyond had LSU-E softball, she has one heck of a ride.