From the archives: Highlights of March 1996 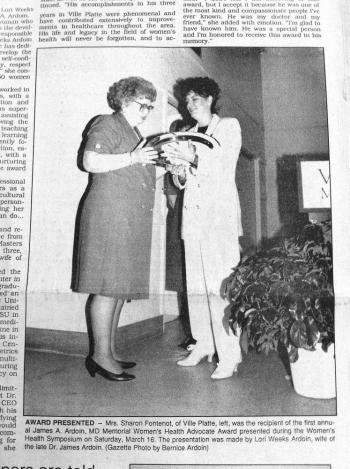 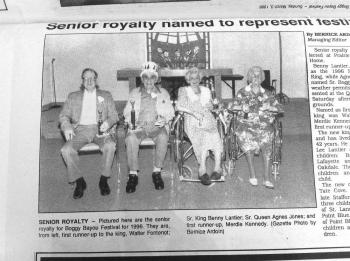 This week, we take a look back at March 1996.
The Boggy Bayou Festival was held March 7-10 at the festival fairgrounds. The goal for the funds raised for the year was to purchase a bus for the residents. Musical entertainment was provided by Shane West, Clint West, Peggy Foreman and Tommy McClain. Comedian Ralph Begnaud also performed during the festival, as well as siblings Moise (15) and Alida (11) Viator, who performed Cajun and Creole music. Dot Chauvin-Madison designed the festival poster and the festival was dedicated to the late Elvin Smith, a festival board member who worked hard with his fellow board members to raise funds for Prairie Manor Nursing Home. Due to a bad storm destroying the old stage area, the newly-built stage area was used for the first time at the festival. Outgoing Queen Kellie Stagg crowned Kylie Elizabeth Burnett, the 17-year-old daughter of Johnny and Pam Burnett of Pine Prairie, as her successor and Sheriff Wayne Morein as Boggy Bayou King. The Prairie Manor senior royalty crowned that year were King Benny Lantier Sr. and Queen Agnes Jones. Walter Fontenot and Merdie Kennedy were runners-up to the new senior royals.
•Several young parish ladies were crowned queens to represent the various organizations,including Farm Bureau Queen Christie O’Quin of St. Landry; Jr. Miss Ville Platte Brittney Brook Foxworth, the daughter of Chip and Cindy Foxworth of Ville Platte; Miss Ville Platte, Dorothy Brooke Lafleur, the daughter of Greg and Renotta Tate of Ville Platte; and Tournoi Queen Trisha Ward, the daughter of Dr. and Mrs. William Ward of Ville Platte.
•Vanessa Toussaint of Ville Platte was selected to be a member of McNeese State University’s spring court.
•The Mamou Rotary Club held a banquet and honored Robert Reed and Brenda Guillory as Man and Woman of the Year.
•World-reknowned Dr. Joyce Brothers was the keynote speaker for Ville Platte Medical Center’s 1996 Women’s Health Symposium held on March 16, and KLFY’s Maria Placer served as guest emcee for the event. Mayor Bennett Baquet presented Dr. Brothers with a key to the city.
•Sharon Fontenot was the first recipient of the James A. Ardoin M.D. Memorial Women’s Health Advocate Award. She was presented the award by the late Dr. Ardoin’s wife Lori Weeks Ardoin during the symposium. When accepting her award, Fontenot said, “I don’t feel I am deserving of this award, but I accept it because he was one of the most kind and compassionate people I’ve ever known. He was my doctor and my friend. I’m glad to have known him. He was a special person and I’m honored to receive this award in his memory.
•Dot Vidrine with the Cajunettes Homemakers Club was named outstanding extension homemaker and the Chataignier Homemakers Club was honored as outstanding homemakers club during the Achievement Day events at the Northside Civic Center.
•The Evangeline Parish Police Jury, at the request of the local veterans associations, voted to change the name of Highway 13 in the parish to Veterans Memorial Highway to honor the area’s veterans.
•Centurytel announced plans to bring Internet service to the area by providing full-featured Internet in Ville Platte and surrounding areas. The Internet would be supported by local Ville Platte telephone numbers that support dial-up account speeds of up to 28.8Kbps. As it is not long distance for the area, Mamou, Pine Prairie, Turkey Creek and Chataignier would also have access to the new service.
•The Anthony Department Store held its grand opening at its Parkview Shopping Center location.
•Sale items at Tate’s Men and Boys included mens western snap shirts for $14.98 - $19.98, boys Dockers for $14.99 - $16.99 and Nike and Asics shoes ranging from $32.97 - $45.
•Sale items for Wal-Mart’s garden sale included volleyball set for $12, box fan for $12.50, assorted garden tools for $3.50 each, 48-quart Igloo ice chest for $16 and Minn Kota trolling motor with 33 pound thrust for $264.96.
•Sale items at Champagnes included spare ribs for $1.49 per pound, 10-pound bag of leg quarters for 29 cents per pound, gallon of Crisco oil for $4.99, five packs of Shurfine spaghetti for $1 and 13 ounce pack of Shurfine coffee for $1.49.
•Movies showing at the St. Landry Cinema included “Waiting to Exhale” starring Whitney Houston and Angela Bassett, “Father of the Bride II” starring Steve Martin, Diane Keaton and Kimberly Williams, and “The American President” starring Michael Douglas and Annette Bening.
•Popular songs of March 1996 included “Because You Loved Me” by Celine Dion, “One Sweet Day” by Mariah Carey and Boys II Men, “Always Be My Baby” by Mariah Carey, “Nobody Knows” by The Tony Rich Project and “Ironic” by Alanis Morissette.