A lesson in architecture 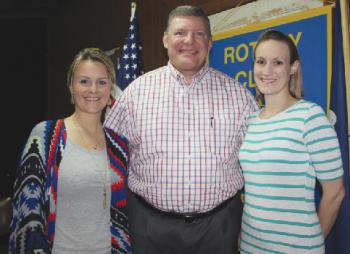 Jill Stevens, owner of Jill Stevens Architecture in Ville Platte, was the guest speaker at the February 14 meeting of the Ville Platte Rotary Club.
Stevens said, “I worked in Baton Rouge for a long time under one of the biggest residential architects in the state, Greg Roberts, and then my husband and I moved back to this area and I took a job in Opelousas.”
She continued, “Now, for about a year now, I started my own firm in Ville Platte.”
Stevens, who is originally from Ville Platte, does both commercial and residential architecture, including new construction, additions and renovations and construction documents. Stevens also does 3D rendering, space planning and plan permitting.
Stevens is a graduate of Louisiana State University. She holds a Bachelor’s Degree in Interior Design and a Master’s Degree in Architecture.
Stevens spoke the club members and guests about the difference between an interior designer, an architect, a draftsman and various types of engineers.
“Lots of people are not sure about what I do or what other people (in the construction planning business) do. When I was in interior design school, so many people asked if I was going to come home and decorate their house.
“No, I don’t even want to decorate my own house,” Stevens said, laughing.
Stevens said interior design school is basically interior architecture.
“What interior designers do, you have to be licensed, have worked under a licensed designer and take license exams,” she said. “Basically you are given an existing structure, a shell, and it may be a column grid on the inside that your have to design around.”
Stevens said interior designers are responsible for separating all of the different spaces inside a building, giving the client what they need, and designing the interior to code.
“We are responsible for the safety and welfare of the public,” Stevens said.
She continued, “What we do effects fire egress and thinking about how people can safely exit the building if there were a fire. We have to think about handicap accessibility, things like that.”
Stevens said an architect must have three years of experience under another licensed architect and pass seven licensing exams before he or she can call themselves an architect.
“In school, they really don’t focus on interior spaces,” Stevens said. “There is too much to focus on on the outside. The cover the form of the outside of the building, how does it make you feel, how is it is shaped, what are the effects of climate and weather on the shape of your building.
“There are multiple structural systems to choose from and you have to have to understand which structural systems are better made for certain situations or certain climate zones, material selections to cover the outside of the building. You have to understand the properties of one material versus the properties of another material. They expand and contract at different rates and they behave in different ways so you can’t just easily attach two different materials together without understanding how they may move together.”
Stevens said in the case of attaching wood directly to metal, one must understand the expansion and contraction rates and know that there is a different connection required for those materials to be used together.
Stevens said a draftsman is someone without design education and most have one or two years of education at a technical college.
“They have worked and learned how to operate in drafting software,” Stevens said. “Oftentimes they work for architects, engineers, surveyors and things like that. Locally, you mostly see them drawing up house plans and small-scale commercial projects.”
Stevens said most draftsmen do not have to have a license, depending on the job.
“Some draftsmen work for themselves,” Stevens said.
“Some work for other people.”