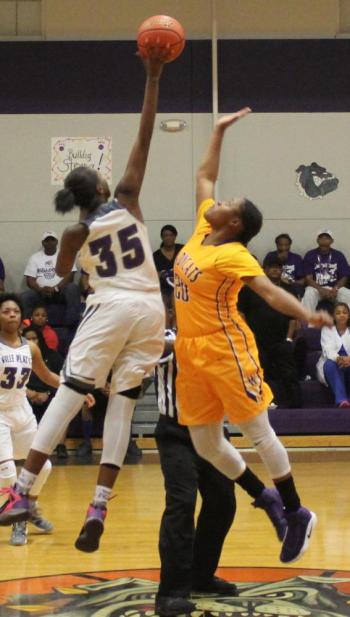 Ville Platte cruises past Wossman in round two of playoffs

VILLE PLATTE – If Ville Platte High had trouble getting the ball inside the paint in their first round playoff game this past Thursday, that was not the case Monday night as the Lady Bulldogs scored 54 of their 69 points on the inside to roll past the Wossman Lady Wildcats 69-47 in a Class 3A regional contest.
The beneficiaries of that inside game were senior center Tyreonna Doucet and senior forward Kealogah Calvin. Doucet tortured the Lady Wildcats with her size and powerful determination to scorch the nets for 37 points, while Calvin punctuated the one-two punch by tacking on 17 points of her own.
Ville Platte will host Iowa tonight as they take on the No. 21 seeded Lady Jackets in a quarterfinal match-up. Game time is set for 6:30 p.m.
Iowa comes out of one of the toughest districts in the state and defeated District 4-3A opponent Jennings 52-48 Monday night to advance to tonight’s game. Game time is set for 6 p.m.
The Lady Bulldogs are not unfamiliar to the quarterfinals, having played in six of the last seven third round games (including this season).
And, Ville Platte head coach Dot Doulet knows this year may be the last time a deep playoff run is made for a while.
“We start four seniors that have been with us for four or more years,” stated Doulet. “It will be very difficult to replace them along with our seniors that come off of the bench. The girls know that this may be their last chance to make a run for the title in a while. Our goal all season long has been to reach the state championship.”
From the opening tip, there seemed to be a concerted effort to get the ball down low on the blocks and to push the ball as much as possible on offense. However, that effort did not pay dividends early on, as Wossman leaped out to a 7-2 lead in the first 3:35 seconds of the initial period.
Ville Platte continued put forth the game plan, despite some early miscues and pulled to within one, 7-6, at the 2:30 mark. But, it was the shooting of the Lady Wildcats that stole the show in the first quarter, as they were able to connect on two three-point baskets late in the period to take a 13-9 advantage at the end of one quarter of play.
The Lady Bulldogs decided to turn up the defensive pressure in the second quarter. With the added pressure and a more rhythmic approach on offense, Ville Platte began to take control of the game, working their way a 23-16 lead with 2:48 left in the period. That lead continued to expand with the Lady Bulldogs owning a 30-19 lead as the first half buzzer sounded.
Doucet exploded in the third quarter, scoring 12 of her game high 37 points in the period. Still, Wossman would not go away easily, Every time Ville Platte looked like they were poised to put the game away, the Lady Wildcats would answer.
In fact, Wossman was able to cut the lead down to eight points, 41-33, with 2:40 left in the period. The score at the end of three quarters of play, 47-35, was actually the biggest lead that the Lady Bulldogs would own in the stanza.
Despite the tenacity of the Lady Wildcats, Ville Platte dominated in the final quarter. The two teams traded baskets for the first five minutes of the period. But the Lady Bulldogs began to run on all cylinders from that point on, scoring 14 of the last 20 points in the contest to put away the Lady Wildcats once and for all.
“At the start of the game, I think our girls were just a little nervous,” said Doulet. “When we looked at film, we thought they were bigger than they actually were. Once we settled down, everything just clicked into place. I really thought our defense played exceptionally well tonight.”