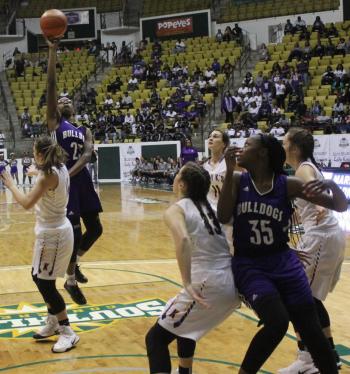 Ville Platte High forward Kealogah Calvin (23) goes up for a jump shot in the paint against South Beauregard while Tyreonna Doucet (35) awaits a possible rebound. The Lady Bulldogs fell to the Lady Knights in the Class 3A semi-finals Wednesday night in Hammond. (Gazette photo by Tracey Jagneaux)

HAMMOND – In a game of contrasts and offensive runs, the Ville Platte Lady Bulldogs could not hold on to a nine-point fourth quarter lead, as they fell to the South Beauregard Lady Knights 60-56 in the Class 3A semi-finals here Wednesday night.
Using their athleticism and size, Ville Platte opened up an 18-5 first quarter lead, only to see that advantage evaporate in the second quarter. After the Lady Bulldogs took control again in the third period, South Beauregard began to pressure Ville Platte on both sides of the floor.
Utilizing a full court press and a faster pace on offense, the Lady Knights regained the momentum in the final quarter to take home the improbable win.
Even with the disappointing loss, Ville Platte head coach Dot Doulet reflected on what turned out to be an unexpected successful season.
“We were in the game to the end,” stated Doulet. “I am so proud of this team and the way they fought all season long. This team was not supposed to be a team to make it this far. But, our players gave everything they had all year and even though this loss is disappointing, I still believe it was a successful season.”
It did not take Ville Platte long to get things going. The Lady Bulldogs opened the game with two three-point baskets and continued to pour it on offensively. Ville Platte extended the lead to 10-3 at the 3:14 mark on a jump shot from Miya McKinney.
Defensively, the quick zone rotation of the Lady Bulldogs forced South Beauregard into taking some highly contested shots.
The Lady Knights shot a miserable 2-for- 16 from the field in the first quarter, as Ville Platte jumped out to a 13-point advantage by the end of the period.
Finding themselves in a deep hole, South Beauregard turned up the heat on defense by applying a full court press. That change resulted in seven turnovers and seven steals in the second quarter arter alone.
The Lady Knights continued to chip away at the Lady Bulldog lead until they had tied the game at 27-27 with a little over one minute left in the half. Ville Platte hit three free throws in the last 25 seconds to take a 30-27 lead into the locker room.
As much as the South Beauregard strategy resulted in closing the gap in the second quarter, the Lady Knights decided to retreat back into their zone defense to start the third quarter. Because of that decision, the Lady Bulldogs were able to open the period on an 8-2 run.
From there the quarter was pretty much a wash. The teams exchanged baskets the rest of the quarter with Ville Platte ending the period by sinking two buckets to take a 47-36 lead heading into the final stanza.
Knowing what their pressure defense accomplished in the second quarter, South Beauregard opened the fourth period by ramping up the intensity on both sides of the floor. When the Lady Knights were not creating turnovers and steals, they were pushing the ball up the floor on offense.
That, and the fact that South Beauregard could rotate several players off of the bench without really missing a beat, contributed to an 18-0 run to begin the fourth quarter. Ville Platte had no answer to the relentlessness of the Lady Knights in the first four minutes of the period.
However, the Lady Bulldogs were able to gather themselves enough to tie the game at 56-56 on a three-point bucket from Jakiah Thomas. During that span, Ville Platte was relegated to fouling South Beauregard, resulting in the loss of two starters. In the end, the Lady Knights were able to hit their free-throws and secure the four-point win.
“We don’t have enough players strong enough to come off of the bench that can handle the up and down game they like to run,” said Doulet. “Of course it got the best of us. I thought we were conditioned enough to handle it, but losing two key players down the stretch because of foul trouble really hurt us in the end.”
Miya McKinney led all Ville Platte players with 14 points. Kealogah Calvin added 12 points, while Tyreonna Doucet finished with 10 points. The Lady Bulldogs ended the season with an overall record of 24-8.