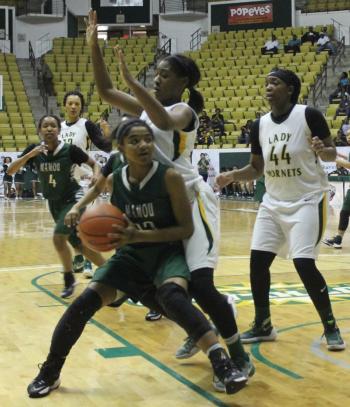 Mamou High’s Tia Gallow (23) looks to score underneath the basket in their Class 2A semi-final match-up with the Rayville Lady Hornets held Wednesday afternoon. (Gazette photo by Tracey Jagneaux)

HAMMOND – A valiant comeback attempt fell short in the fourth quarter, as the Mamou Lady Demons were eliminated from the playoffs with a 54-44 loss to the Rayville Lady Hornets in the state semi-finals here Wednesday afternoon.
Mamou trailed 32-16 at halftime, but managed to will their way back into the game in the third quarter, cutting the Rayville lead down to 36-35.
However, the size and quickness coupled with the amount of energy spent in the third period took its toll on the Lady Demons, as they were outscored 18-9 in the final period.
“In the end it was foul trouble that really got to us,” stated Mamou head coach Denisha Allison-Lewis. “Losing some key players at the end disrupted our offensive and defensive rhythm. That allowed them to get some easy lay-ups.
Still, I am so proud of our players. They showed true heart and soul the entire game and the entire season.”
The first two quarters were not kind to Mamou in terms of missed shots and turnovers. The Lady Demons were 4 of 24 from the floor in the first half including a woeful 1 for 10 from beyond the three-point line. Mamou also committed 15 turnovers in the first and second quarters combined.
“We did not come out playing as well as we had the first three playoff games,” said Allison-Lewis. “I don’t know if we were a little intimidated by their size or what, but it was just not like us.”
It was evident early on that Rayville had a distinct advantage in size as they averaged over three inches more in height than Mamou. That vertical advantage paid dividends for the Lady Hornets allowing them to collect six more rebounds in the first half.
The Lady Demons came out in the first quarter hoping to counteract the bigger Lady Hornets by utilizing a three-quarters court trap. Rayville did not seem phased by the pressure as they were able to take an 11-4 lead as the first period came to an end.
Mamou tried to keep pace in the second quarter. The two teams traded baskets for the first two minutes of the second period. But, the Lady Hornets began to assert themselves on the inside as well as the outside.
Rayville went on a 14-3 run over the next six minutes to take a 32-12 lead late in the quarter. The Lady Demons hit the final four points of the period to cut the lead to 16 before going into the locker room.
“At halftime, we told them that we were playing their game and we needed to come out and start dictating the pace,” commented Allison-Lewis. “I thought we were able to turn up the intensity in the second half. We knew that they had trouble with the press, so we adjusted and were able to get ourselves back into the game.”
If the first half belonged to Rayville, the third quarter was definitely owned by Mamou. The Lady Demons turned up the heat on defense, stretching the trap to full court, causing several Lady Hornet turnovers.
By the time Rayville had hit their second basket of the quarter, Mamou had cut the lead down to seven, 37-29, with two minutes left in the stanza.
The Lady Demons finished the quarter scoring the next six points and trailed by only one point as time expired in the period. Needless to say, the Lady Hornets looked like deer caught in headlights.
Mamou actually took the lead for the first time in the game on the very first shot of the fourth quarter. Rayville responded with five unanswered points in their next two possessions. Nevertheless, the Lady Demons were able to tie the game at 41-41 with 4:44 left on the clock.
From that point on, it seemed as if Mamou just ran out of steam. Rayville took over the game and knocked down 13 of the next 17 points scored in the contest to close out the win.
Darelzray Bellard netted 11 points to lead the Lady Demons, while Kiajah Wilson and Braylin Charles added 10 points in the loss. Mamou ends the season with an overall record of 20-10.