Mamou moves on to quarterfinals with big win over Lakeview 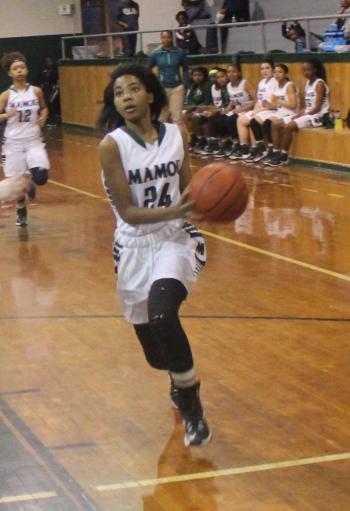 Mamou High’s Tavia Gallow (24) drives the lane for an easy lay-up. The Lady Demons will take on Rapides tonight in a quarterfinal match-up at Rapides High School. (Gazette photo by Tracey Jagneaux)

MAMOU – The Mamou Lady Demons earned a berth in the quarterfinals of the Class 2A state basketball championship by beating Lakeview, 67-54, Monday evening.
Eighth-seeded Mamou will travel to Lecompte to face the top-ranked Rapides Lady Mustangs on Thursday.
“I’m so proud of our team,” said Danisha Allison Lewis, head coach of the Lady Demons. “We executed our game plan to a T, and we had to. Lakeview is a tough team, and we had to work hard for this win.”
The Demons benefited from improved shooting at the charity stripe in the fourth quarter to hang on for the win. Within the first minute of the last period, both teams were in the double bonus, with each foul sending both teams to the free throw line for two shots.
Leading by just five points, Mamou was able to play solid defense without fouling the Lady Gators. Although Lakeview shot 62.5 percent from the stripe, it only had eight shots.
However, Lakeview consistently sent Mamou back to the free throw line again and again in the fourth quarter. The Lady Demons had 22 shots from the free throw line, making 15 of them.
Lewis credits her team’s practice habits to the good shooting late in the game.
“At practice, we run and run and run; then we go to the free throw line when we’re tired,” mimicking late game conditions, she explained. “We can’t leave practice until the team shoots at least 65 percent.
“That kind of practice really paid off tonight,” she said. “Without hitting those free throws, this could have been a different ball game.”
Another important factor Mamou’s win was improved play from the bench. With both teams committing so many fouls, both teams found themselves looking to role players to give a lot of time on the floor.
In the first round of the playoffs, the Lady Demon’s bench did not provide the same level of intensity as Lewis expects. Monday evening, however, Mamou’s role players responded to the challenge.
“This was totally different from last time,” Lewis said. “Tonight, our bench did everything we asked them to do. They kept up the high pace, the high tempo, that our team likes to play. Because of that there wasn’t a drop-off in performance when they got on the floor.”
The Lady Gator’s head coach Akilah Isaac was disappointed in her team’s shooting performance. Lakeview was shot just 21 percent from the floor for the game, including going 4-of-19 in the last quarter.
“We got into foul trouble,” Isaac said. “With our best players on the bench for half the game, our role players had trouble making their shots. We dug ourselves into a hole, and we had no choice but to try to shoot our way out of it. Unfortunately, we just couldn’t connect.
“A lot of credit goes to Mamou,” Isaac commented. “They came out aggressively, and brought the game to us. They’re a really good team.”
The only lead in the game that Lakeview had was 2-0 to start the first quarter. By the end of the stanza, however, Mamou had an 11-8 lead. The Lady Demons extended their lead in every quarter, taking a 30-24 lead at halftime and a 46-38 lead at the end of the third quarter.
Four Lady Demons scored in the double-digits, with Kiajah Wilson’s 17 points leading the way. Ka’zhana Richard and Darelzray Bellard both netted 14 points, and Tia Gallow scored ten points.
The Lady Gators were led by Jada Williams, who scored 17 points.