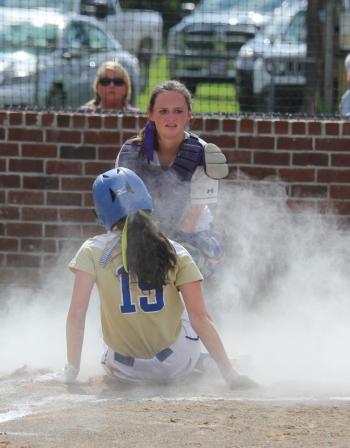 Sacred Heart shortstop Karli Fontenot slides into home plate safely after tagging up on an Erin Fontenot sacrifice fly to score the second run of the game against Opelousas Catholic. The Lady Trojans lost 5-3 to the Lady Vikings in the regional round of the Division III playoffs. (Gazette photo by Tracey Jagneaux)

OPELOUSAS -- After gaining a 3-0 lead to start the game, the Sacred Heart Lady Trojans could not carry that momentum farther, as they fell to the Opelousas Catholic Lady Vikings 5-3 in the regional round of the Division III softball playoffs here Thursday afternoon.
This marked the third time this season the two teams had met because they were both part of District 5-2A. Sacred Heart and Opelousas Catholic split the two previous contests.
Despite the disappointing loss, Sacred Heart head coach Dusty Collette expressed his pride for the play of the Lady Trojans.
“The team really stepped up and matured early on in the season,” stated Collette. “Throughout the season, no matter the ups and downs, they kept a never say die attitude and that showed through today.”
“Our seniors were great leaders and set a perfect example for the younger players,” Collette continue. “We are going to miss that leadership. It is going to be hard to say good-bye to those seniors.”
The Lady Trojans struck first in the top of the first inning. Caroline Fontenot reached on a walk to lead off, but was caught rounding the bag too far on a passed ball for the first out.
The second batter for Sacred Heart, Sydney Fontenot, also drew a walk. Karli Fontenot and Olivia Hernandez both singled to load the bases.
An infield single off of the bat of Madison Hernandez plated Sydney Fontenot and kept the bases loaded.
Karli Fontenot found the plate for the second run on a sacrifice fly from Erin Fontenot, which advanced Olivia Hernandez to third. Camille Soileau singled home Hernandez for the third and final run of the inning.
Meanwhile, Sacred Heart starting pitcher, Aubrey Fontenot was in command on the hill, allowing no runs in the first two Lady Viking at bats.
It wasn’t until the bottom of the third that Opelousas Catholic was able to get on the scoreboard. In that inning, aided by singles from Madison Nicholas, Anna Lafleur, Tori Collins, an error and a passed ball, the Lady Vikings were able to cut the lead down to 3-2.
Opelousas Catholic took the lead for good in the bottom of the fourth by adding two more runs. Courtney Thomassee drew the walk to lead things off, followed by a single from Khaki Pythian.
Lauren Miller laid down a perfect bunt that led to an error, scoring Thomassee and advancing Pythian to third. Pythian then scored on a sacrifice fly off of the bat of Nicholas to give the Lady Vikings the 4-3 lead.
The final run of the game came in the bottom of the fifth when Emily Ortego hit a solo home run over the left center field wall.
Sacred Heart did manage to hit the ball hard in the final six innings, but everything was right at their opponent’s gloves. However, the only other hit the Lady Trojans could muster was a double off of the bat of Madison Hernandez in the top of the third inning.
Sacred Heart finishes the season with an overall record of 18-12.