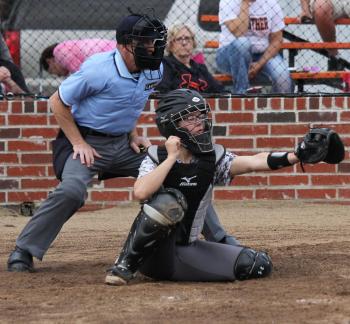 Pine Prairie catcher Sara Tate reaches out for a pitch in a game played recently. Tate was one hit shy of the cycle in the Lady Panther’s 13-1 drumming of the Eunice High. (Gazette photo by Tracey Jagneaux)

It was another big day for the Pine Prairie Lady Panthers, as they picked up their fourth straight district win with a 13-1 run-rule victory over the Eunice Lady Bobcats at home Thursday afternoon.
Meanwhile the Sacred Heart Lady Trojans fell on the road in their first District 5-2A contest to the Notre Dame Lady Pioneers by the score of 3-0.
Here is a run down of those two games.

Eunice vs.
Pine Prairie
The Lady Panthers began the game on fire offensively, scoring five runs in the bottom of the first. The big hits came off of the bats of Karli Ortego and Sara Tate. Ortego blasted a two-run home run, followed by a solo shot by Tate.
Jacie McFarlain added to the lead in the top of the second, as she scored on a sacrifice bunt from Tori Johnson.
Pine Prairie tacked on five more runs in the bottom of the third to bring the lead to 11-0. Singles by Macey Harvey and Tate were topped off by a triple to right-center field from Johnson.
The Lady Panthers completed their scoring in the bottom of the fourth with two more runs.
Eunice’s lone run came in the top of the fifth.
Tate was one hit away from the cycle, as she went three for three with a single, a triple and a home run to lead the Lady Panthers at the plate.
Pine Prairie is now 13-4 on the year and 4-0 in district.

Sacred Heart
vs. Notre Dame
Sacred Heart did not produce very much in the way of offense against Notre Dame in Thursday afternoon’s contest.
The Lady Trojans were only able to produce two hits the entire game, as Caroline Fontenot and Olivia Hernandez were the only players to accomplish that feat.
In fact, Fontenot was the only Sacred Heart player to reach second base the entire game.
Interestingly enough, all three of the Lady Pio runs came in the bottom of the fourth and all three runs came via solo home runs.
Camille Fontenot picked up the loss, going six complete innings allowing three runs on five hits while striking out three and walking two.