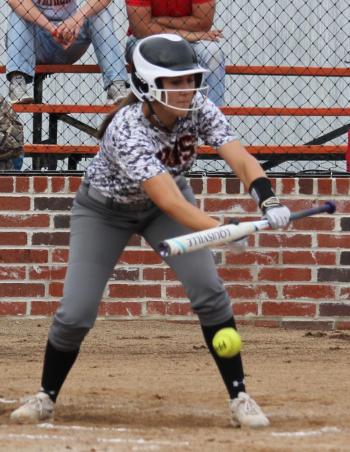 Pine Prairie’s Karli Ortego lays down a bunt in a game earlier this season. The Lady Panthers are now two wins away from a district title after rolling past Port Barre 7-2.

The wins keep on coming for the Pine Prairie Lady Panthers softball team, as they cruised past the Port Barre Lady Red Devils 7-2 in a District 5-3A win on the road Tuesday afternoon.
With the win Pine Prairie is now 19-6 on the year and a perfect 8-0 in district play.
Meanwhile, the Sacred Heart Trojan baseball team traveled to Pineville to face off against the Ouachita Christian Eagles at Louisiana College in what could be a Division III playoff preview.
Unfortunately for Sacred Heart, Ouachita Christian was on their game and came away with a 10-0 win over the Trojans Tuesday afternoon.
Here is a re-cap of those two contests.

Pine Prairie vs.
Port Barre
Pine Prairie got going quickly in this contest, scoring two runs in the top of the first inning.
Jacie McFarlain singled and scored and Macey Harvey doubled and scored to put the Lady Panthers up early.
Pine Prairie went up 3-0 after plating a single run in the top of the third.
Meanwhile, Lady Panther pitcher Karli Ortego was spot on, striking out five Lady Red Devils in the first three innings.
Pine Prairie added two more runs in the fourth and in the sixth innings.
Port Barre’s only two runs came when they scored solo runs in the fourth and sixth innings respectfully.
The Lady Panthers are two wins away from an outright district title.

Sacred Heart vs.
Ouachita Christian
Things seemed to be going smooth for Sacred Heart in the first three innings of play. Starting pitcher Brandon Fontenot cruised through the first three times the Eagles batted, giving up only two hits and walking one.
However, the bottom half of the fourth inning things did not go so well for the Trojans. After Fontenot gave up two runs, he was relieved by Connor Fontenot.
But, Ouachita Christian took advantage of Connor Fontenot’s lack of control and plated six more runs on one hit and five walks.
Christian Duplechain relieved Fontenot and surrendered the final run.
Alec Gotro and Nick Perry were the only two Trojan batters to earn hits in the game.
Sacred Heart falls to 13-5 on the season with the loss.