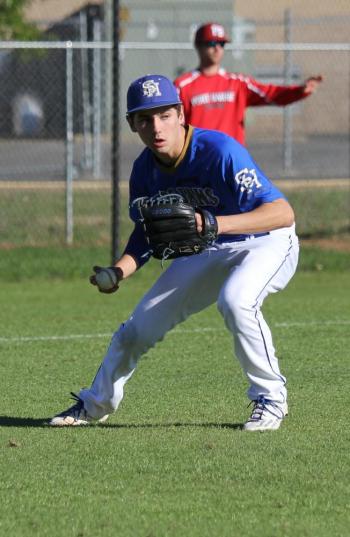 Sacred Heart’s Cannon Beaver looks to throw a runner out at first base in a game played earlier this week. The Trojans went 2-1 this past week in their three games. (Gazette photo by Tracey Jagneaux)

VILLE PLATTE — It looks like it is going to be another one of those years for the Sacred Heart baseball team.
After defeating Port Barre on Tuesday by one run, the Trojans traveled to Breaux Bridge for a make-up game from last week.
In another hard fought game, Sacred Heart fell to the Tigers 4-3, their fifth one run contest this season.
But, not letting the loss get them down, the Trojans followed that game up with a big 7-0 win over perennial Class B power Oak Hill here Thursday afternoon.
Here is a re-cap of those two games played.

Sacred Heart
vs. Breaux Bridge
Sacred Heart got off to the right start against Breaux Bridge, scoring two runs in the top of the first inning.
JT Harper led off with a single followed by a fly out to right field off of the bat of Wesley Launey.
Harper was picked off at first for the second out. Cleanup hitter Garret Fontenot then followed with a two out single.
Connor Fontenot promptly doubled, scoring Garrett. Connor crossed the plate, scoring the second run when Brandon Fontenot reached on an error by the centerfielder.
Breaux Bridge cut the lead in half, plating a single run in the bottom half of the inning. The Trojans added another run in the top of the second to make it 3-1.
Unfortunately, the Tigers took control for good in the bottom of the third, getting three unanswered runs.

Oak Hill vs.
Sacred Heart
Sacred Heart’s Cannon Beaver went six scoreless innings and Alec Gotro finished off the game in the seventh to aid in pushing the Trojan record to 9-4 on the year.
Sacred Heart scored single runs in the second and third innings to move ahead 2-0.
After Drew Bordelon drew a walk to lead off the bottom of the fourth. That is when Gotro strode to the plate and blasted a 3-2 pitch over the wall for a two-run home run to extend the Trojan lead to four runs.
Sacred Heart added three more runs in the bottom of the fifth to close the game out.
Garrett Fontenot was three for three at the plate, including a double to lead the Trojan offensive attack.