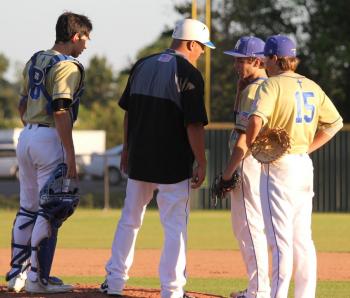 Sacred Heart assistant coach Brent Duplechain meets with his pitcher on the mound in the Trojan’s 11-10 win Tuesday afternoon. Sacred Heart is now 12-4 on the year. (Gazette photo by Tracey Jagneaux)

What should have been an easy win for the Sacred Heart baseball team turned into a fight, as the Trojans had to score the winning run in their final at bat to secure an 11-10 win over St. Ed’s at home Tuesday afternoon.
Meanwhile the Pine Prairie Lady Panther softball team continues to cruise through district, as they blitzed Northwest in both games of a doubleheader by scores of 18-0 and 24-0 Tuesday afternoon.
Here is a re-cap of those games.
St. Ed’s vs.
Sacred Heart
Sacred Heart began the game by giving up a single run to the Blue Jays in the top of the first, but answered with a run of their own in the bottom half of the inning.
The Trojans took over the lead in the bottom half of the second, scoring two runs on three hits after holding St. Ed’s scoreless in the top of the inning.
Sacred Heart really took control over the next four innings, outscoring the Blue Jays 6-2.
But, in the top half of the seventh inning, St. Ed’s rallied to plate seven runs and take a 10-9 advantage.
The Trojans needed some late inning magic and got it in the bottom of the seventh.
Nick Perry led off the inning reaching base after getting hit by the pitch. JT Harper singled, bringing Perry to third base. A pitch in the dirt enabled Harper to reach second.
With runners now on second and third, Wesley Launey walked to the plate and ripped a 1-2 pitch down the left field line, scoring Perry and Harper for the win.
Sacred Heart is now 12-4 on the year with the victory.