Ville Platte defeats Vidalia for first win of the 2017 playoffs 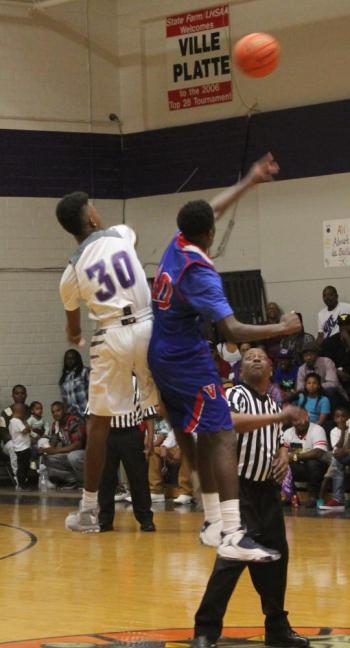 Ville Platte’s Brandon Thomas (30) flies high for the jump ball against Vidalia’s Demarco Brown (40). The Bulldogs defeated the Vikings Friday night 79-58 to advance to the second round of the 2017 playoffs. (Gazette photo by Tracey Jagneaux)

VILLE PLATTE – Slows starts have plagued the Ville Platte High Bulldog basketball team all season long and Friday night was no exception, as they defeated the Vidalia Vikings 79-58 here in a first round Class 3A playoff contest.
“I just think we came out a little nervous,” stated Ville Platte head coach Tommy Jones. “But, once we settled in, we just played our game and it showed in the second half. This was the first home playoff game in a while for us.”
With the win, Ville Platte will have to travel to Amite to take on the Warriors in a regional game. Amite defeated Northwest 70-64 in their first round game.
As of press time, no day or time had been set for that match-up.
Ville Platte controlled the opening tip, but not much else in the first 2:20 of the first quarter. Vidalia hit on two three-pointers and added a two-point bucket and a free throw to jump out to a 9-0 lead.
The Bulldogs, as they usually do, clawed their way back into the game. Over the next three minutes Ville Platte went on a 9-0 run to tie the game back up.
The two squads exchanged baskets the rest of the quarter, with the Bulldogs gaining a slight three point edge, 18-15, as the first period buzzer sounded.
The momentum Ville Platte had toward the end of the first quarter carried over into the second quarter. The Bulldogs stretched their lead to 10 points, 29-19, at the 4:36 mark.
However, the Vikings hung tough. With every second that ticked away in the quarter, Vidalia would slowly chip away at the Ville Platte lead.
The Bulldogs began to cool down on the offensive side of the floor and the fouls began to mount for Ville Platte, allowing the Vikings to cut the lead down to only four points, 35-31, as the two teams headed into the locker room.
“At halftime, we talked about going back into our zone defense,” said Jones. “With a number of our players carrying multiple fouls into the second half, I thought we needed to not be as aggressive on defense as we were in the first half. We also missed a number of assignments on defense in the first half that cost us some points.”
That strategy paid off for the Bulldogs beginning in the third quarter. With Ville Platte packing down on the inside, Vidalia was forced to take some ill-advised shots from beyond the arc. And when the Vikings would miss, the Bulldogs were off and running on several fast break opportunities.
After three minutes of play in the third quarter, Ville Platte only owned a 40-37 lead. But, by the time the two minute mark had come, the Bulldogs were up 56-42.
Ville Platte continued to put pressure on the Viking shooters to make shots, which they could not do. In the last 1:37 seconds of the third quarter, the Bulldogs went on an 11-0 run to take a 65-46 lead going into the final period.
The last quarter saw more of the same from Ville Platte, as the lead continued to grow throughout the fourth quarter.
Ville Platte was led by Shanicole Holland who scorched the nets with 27 points.