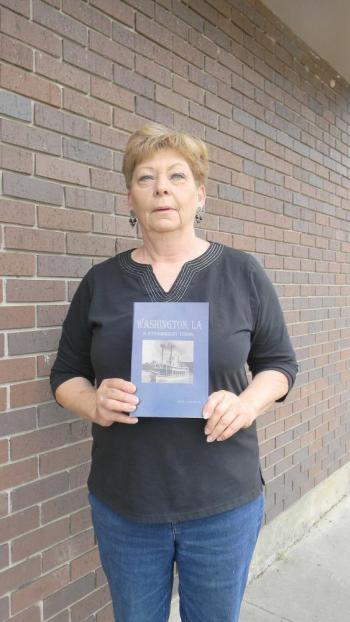 Cheryl Bihm Myers’ love for history and genealogy, along with her dedication to research, has led to the publication of her third historical work “Washington, LA - A Steamboat Town.” After the success of her first two historical books, “Palmetto: The Early Years” (published in 1987) and “The History of Port Barre” (published in 1997), the Palmetto native and Opelousas resident recalls, “People kept telling me to do one on Washington.” She started working on the project 12 years ago and says, research wise, she spent about 10 years working on the book. During this time, she stepped away from the work to care for her ill husband before returning to the project.
As she was working at the time, Myers did most of her research on the weekends and utilized Ancestry.com and stories and photos from family members to aid in her search for information. She also researched the old township maps and original land grants and deeds from the Washington area beginning with 1720. In the book, she discusses every business and family in Washington from the years 1720 - 1920. She says, “I stopped at 1920 because there were no new businesses coming in and the steamboats had stopped running.”
“Washington, LA - A Steamboat Town” begins with the French Concessions and Spanish land grants, with each individual family carried out through four generations, allowing the book to be used as both a historical and genealogical reference.
The book features many families, and due to the over 2,000 names, she says, “I indexed the book by families, other wise the index would be as long as the book.”
A couple of local families with origins in Washington discussed in the book include the Coreil and Sittig families. Myers says, “Ville Platte resident Louis Marius Coreil operated a warehouse with Francois Pitre for over 20 years beginning in 1858.”
Some of the other original family surnames listed include Courtableau, Lemelle, Bello (Donato), Carron, Chretien, Duralde, Gradenigo, Vidrine and Doucet. Myers notes, “Many Washington residents can claim their ancestry through the steamboat captains: Hinckley, Carriere, Crawford, Capps, Tesson, Willson, Louaillier or Webb.”
Also covered in the book are details of all of the owners and proprietors of the warehouses, stores, hotels, coffee houses, copper shops and historical homes in Washington, from its beginning through the book’s cutoff point of 1920. Plantations located outside of the Washington corporate limits are also discussed in the book, including Arlington, Macland, Starvation Point, Homeplace and Moundville Plantation.
Myers got her love of history and desire to know “when, where and how” from her parents, Robert L. and Hazel Bellard Bihm, and she says her next project is to resume work on her Bihm family history.
Of the research process, Myers proclaims, “I love it because it is like digging for treasures.” One of the most surprising things she learned while researching the town of Washington was the story of Donato Bello, a white man with both a white wife and mulatto mistress. He had children with both ladies, and the children with the mistress took his first name as their surname instead of Bello. One of the descendents, Martin Donato (Bello), became a very prominent citizen and was considered the patriarch of the Donato clan. He was one of the largest property/slave owners in St. Landry Parish and had a good relationship with his white half-siblings.
Myers has a Master’s Degree plus 30 years in education and is a retired school principal with the St. Landry Parish School System. She and her late husband, Jimmie, have two children, Jeremy and Monique, and two grandchildren, Colin and Sydney.
To promote the release of this book, she recently held a book signing at the Steamboat Warehouse Restaurant. To get a copy of Myers’ book, you can call her at 337-942-8616 or 337-945-0768.