Rotary Club gets updated on community news in VP and Mamou 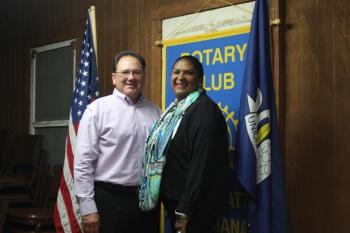 Ville Platte Mayor and Rotarian Jennifer Vidrine (right) spoke to the Ville Platte Rotary Club at its first meeting in September. She updated the club on new services coming to the city. She is pictured with Rotary President Wayne Vidrine (left). (Gazette photo by Tony Marks) 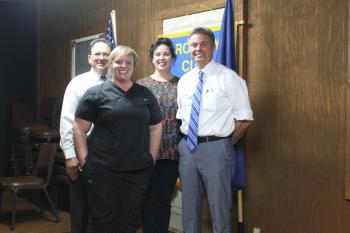 During its first meeting of September, the club heard from fellow Rotarian and Ville Platte Mayor Jennifer Vidrine. She first congratulated the Sacred Heart Trojans on winning the Tee Cotton Bowl.
“It was a great game, and it was good to see all the Trojans and the Bulldogs together again in the stadium,” she said. “It was just a great sight. Everything went well, and we promise we’re not going to let anyone or anything stop this Tee Cotton Bowl again because it’s too much of a good thing.”
With one hurricane passing and another one on its way, the mayor then updated the club on the city’s flood prevention. “We’ve been in Shady Acres digging ditches and blowing out culverts,” she explained. “We did put a new pipe at that canal, and we’re going to get a tree cut which is going to allow the water to keep flowing. We’re then going to come back and dig up the culverts that were put in inappropriately or wrong.”
“We’re going to do the same thing on Hickory Street and all of the other streets that are prone to the flooding,” she added.
The mayor also informed the Rotary Club on new services coming to the city. “We have a new software system where we can detect water leaks,” Vidrine announced. “We will be running a leak survey every week, and it will tell us who has a leak on their side. The people won’t have to wait a whole month before they know that they have a leak.”
Other services coming to the city will benefit the parks. “We’ve already started putting up some new pavilions at the MLK park,” she Vidrine said. “Then we will come back to the Northside park and do the same thing. We’re trying to bring our parks up to par to make sure that they are family friendly and have a great environment.”
“We have $1.6 million in grant money coming to fund the recreational park which will allow us to have four more fields,” she continued. “That will allow us to have more state tournaments and more regional tournaments.”
Vidrine also announced that new red lights and new street lights are going up around town. “I want to make sure all of our streets are lit up,” she said. “I want them to see Ville Platte from space.”
Casey Duos, who is a pharmacist at Savoy Hospital in Mamou, spoke to the Rotary Club at its next meeting about the upcoming Breast Cancer Awareness Walk that will be held on October 14. The walk is a fundraiser to benefit the Savoy Cancer Center.
“We have a timed 5K for the runners, and we have a very nice survivor ceremony where we recognize survivors and cancer patients,” said Duos. “We do some finish line activities. We have a live band, and it’s sort of a festival atmosphere.”
Duos went on to say that around 500 people come out each year to participate in the event that is sponsored by Savoy Indigent Patient Support. “We try to exhaust other forms of financial assistance from national programs, but we try to use the money that we raise from the Awareness Walk for things that these programs don’t pay for.”
She concluded, “Our goal is to increase community awareness and to have the community come out and show its support for our cancer patients because it’s very important to them.”