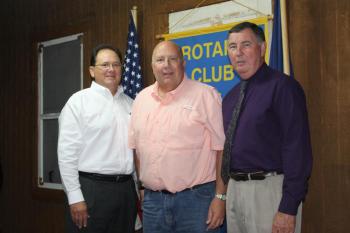 Pat Derouselle (center) was the guest of Rotarian Bill Brunet (right) as he spoke to the Ville Platte Rotary Club about this year’s events for the Louisiana Cotton Festival. The two are pictured here with Rotary President Wayne Vidrine (left). The festival begins Tuesday, October 10 with the Contradase and ends Sunday, October 15 with the running of the Tournoi. (Gazette photo by Tony Marks)

Pat Derouselle, President of the Louisiana Cotton Festival, was the guest of Rotarian Bill Brunet at Tuesday’s meeting of the Ville Platte Rotary Club.
“It’s cotton time,” Derouselle said as he began his talk. “I was at Fairs and Festivals in early February, and we lost 14 festivals last yer. A few were lost for lack of funding and lack of community support. I’m here to thank you business leaders that we’re still here” after 64 years.
“We’ve come a long way since I started with the festival 33-years ago, and I’m grateful for the city’s involvement,” he continued. “We’re very solid and sound financially.”
Derouselle spoke to the Rotary Club about this year’s royalty. “King Cotton LXIV this year is Billy Nungessor,” he said.
Knowing Rotary’s involvement of Chicot Park, Derouselle said, “I’ll have Billy at home next weekend, and we’re probably going to take a ride to Chicot Park just to view” the conditions.
“Colonel Cotton is State Representative Bernard LeBas,” Derouselle added. “LeBas and his family are very involved in the festival, and we really like to recognize the locals who do a lot for us. Janie Knighten is going to be our parade marshal, and she has been very instrumental in the Swamp Pop Museum.”
Cotton Festival week begins Tuesday, October 10 with the Contradanse inside the Northside Civic Center. According to Derouselle, the Civic Center will open its doors at 5:00 p.m., and admission is $5.00.
“This year we didn’t have to look for kids at all to dance,” said Derouselle. “Right after the festival last year, I met some of the kids at the store, and they asked if they can dance at this year’s festival. What’s happening now is the ones that are coming up are teaching the younger ones. For me that’s the biggest thing because we’re keeping the Contradanse alive.”
“If we lose that, we’re just going to chip away a little bit at things that we don’t want to do anymore, and I don’t want it to come to that,” continued Derouselle. “(The Heritage Manor) residents enjoy it and are excited about it. Their kids are glad to be there with them to be recognized ad La Reine and Le Roi.”
The festival continues Wednesday, October 11 with the 4-H Food Fest at 2:30 p.m. inside the Civic Center and the 4-H Cotton Pickin’ Pet Show at 4:00 p.m. under the pavilion. Derouselle said, “The kids are really involved with it, and we’re happy to participate with the medals and presentation.”
The carnival then begins the same day at 5:00 p.m. on the Civic Center grounds. Wristband days for the carnival are Wednesday and Thursday from 5:00 -10:00 p.m. and Friday, Saturday, and Sunday from 1:00 - 5:00 p.m. The “wristbands are for unlimited rides and are going to be at the fairgrounds, but people will be able to purchase an advanced ticket from Cafe de LaSalle,” said Derouselle.
“Our carnival just received the National Outdoor Amusement Award of Safety for background checks, concession and ride safety, and employee identification,” he added.
The Street Dance this year is set for Friday, October 13 on the Civic Center grounds. Travis Matte and the Kingpins kick off the musical lineup at 6:00 p.m. and plays until 8:00 p.m. Keith Frank and the Soileau Zydeco Band then takes the stage from 8:00 - 10:00 p.m. before Category 6 caps off the night from 10:00 - midnight. Derouselle said the night cap is “very large on the coastal markets in casinos from Mississippi to New Orleans.”
Derouselle went on to tell the Ville Platte Rotary Club about the weekend’s activities. “Saturday we’re expecting 18 or 19 visiting festival queens as we’re going to have the coronation for Queen Cotton LXIV,” he said. “The Harvest Mass will be Sunday at Queen of All Saints at 8:30 a.m. It is not a private mass because we’re there. They’re just going to have all of us there.”
“The Grand Parade of Cotton will roll down Main Street,” added Derouselle. “We moved that up to noon several years ago in order to give the Tournoi enough time for daylight, and the running of the Tournoi will take place at the Industrial Park starting at 2:00 p.m.”