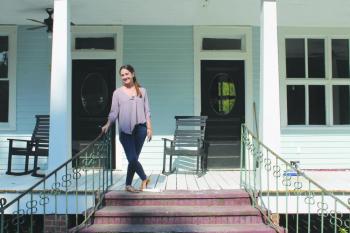 Maggie Eades (pictured here) stands on the front porch of a house that will become a bed and breakfast in Ville Platte. The house is on South Soileau Street and was the office of Judge Dore. (Gazette photo by Tony Marks)

When people think of bed and breakfasts in Louisiana, they tend to think of ones in the Garden District of New Orleans or along the Cane River in Natchitoches. But now, thanks to the efforts of Maggie Eades, there will soon be one here in Ville Platte on South Soileau Street.
“Every time I go somewhere with my family, we stay at a new little bed and breakfast that we find,” Eades said. “We had stayed at one last summer, and I said a bed and breakfast like this will be so cute in an old house in Ville Platte. I felt like there weren’t too many options in town of places to stay.”
The bed and breakfast project is in its final stages as Eades is applying the final coats of paint and as furniture is being moved in. “All the carpentry and everything is rebuilt,” she said. “We just restored all the floors and the walls back to the original, so now it’s just applying finishing touches.”
The house is built with redwood and some cypress. The house also has two bedrooms with a bathroom, a kitchen, a living room, and a dining room. It has a front porch and a deck in the back. According to Eades, “it’ll sleep six because there’s a sleeper sofa in the living room.”
There are two lots behind the house for which Eades has future plans. “I’m hoping to do something back there like an event,” she explained. “We’re thinking there’s plenty of space back there because it goes back two more lots. That way they can have the actual event here, and they can sleep here.”
Once the project is finished, the house will first serve as a rent house before becoming a bed and breakfast. “Right now we have people moving in who are renting it for three months,” Eades said. “They’re just going to rent it as a house, but after they leave we’re going to provide a buffet breakfast.”
While breakfast will not be available unless the bed and breakfast is rented, guests can go anytime next door to Eades’ Cottage Couture and have lunch. “This is open every day,” Eades said while sitting in the kitchen of Cottage Couture. “Our cafe is open from 11 to 2 on Tuesday through Friday, but we don’t have breakfast here.”
Eades is the daughter of Nickie and Marie Thevenot. She graduated from Sacred Heart in 2004 and has since married Patrick Eades from Opelousas.
“I’ve always loved everything old ever since I was younger,” she explained. “I loved old things, and I loved finding old things, finishing them, and making them useful again. After college, I started renting a little space in Opelousas at the Spotted Cat.”
“I moved back home, and when this house came available, I bought it and restored it. Then I turned it into this a few years later.”
While in college at LSU, Eades studied interior design. “I still do design on the weekends,” she said. “I have a lot of clients that I decorate and design for, but this project is kind of number one right now.”
Eades added what Cottage Couture means to the town. “I like to think that this is big for Ville Platte,” she said. “The store is doing well, and all the feedback we get is great. We have people for Homecoming who rent it out, and now it just gives our town more options so you won’t have to go to Lafayette.”
“It’s good to have something here, and I think the bed and breakfast is going to help with that too when we have visitors from other towns. We’ll have a nice little place for them to stay,” Eades concluded.
Eades shared some of the history of Cottage Couture and the bed and breakfast. “This house which is Cottage Couture was built in 1902,” she said. “The owner was Judge Dore. Through research, I’ve met his family members, and they come in and visit. They love reminiscing about it, so I’ll be happy to show them the bed and breakfast.”
The bed and breakfast that was Judge Dore’s office was also the home Camille Fontenot. “ “The porch was screened in, and that was where we ate dinner every Saturday and where my momma tutored me every summer.”
As executive director of Ville Platte Chamber of Commerce and Evangeline Tourism, Fontenot thinks this bed and breakfast is fabulous for the community. “If this house could talk, put your party dress on and fix a drink,” concluded Fontenot.