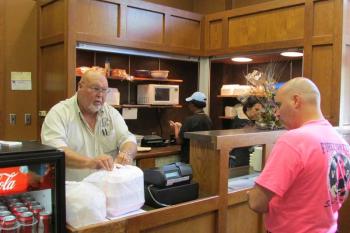 People have started calling someone new at the parish courthouse looking for various official sounding titles, such as The Justice, The Defendant, The Prosecutor and The Bailiff.
They’re calling Benny Dupre. And instead of having to wrestle with the legal system, when they get what they want from Dupre, they eat it.
Dupre recently opened The Docket on the first floor of the courthouse, where he sells po-boys named for the various participants in the legal system, and six salads with more traditional salad names. The legalistic theme of the shop came from Dupre’s wife, Deborah Brunet.
People may recall Dupre as the owner of the Pizza King restaurant across from the ball park on West Lincoln Street. He ran that, from 1993 to 1995, after retiring from the phone company where he worked for 23 years. His head cook at the Pizza King, Wanda Ben, is now working with him at the Docket, along with Stacy Ardoin.
Dupre said he decided to open the shop because, “I felt they needed this service at the courthouse.” He said it may remind people of the small shop in the courthouse when it first opened about 35 years ago.
As word of the shop is getting out, “business is good, and it’s improving daily,” he said. He’s even started delivering lunch in the Ville Platte area.
Because the business looks like it’s in the courthouse to stay, he’s planning to add a large piece of art on the wall opposite the shop, where a large black-and-white photograph now hangs: a 10- by eight-foot painting of Chicot State Park his stepson, Jeff, painted.