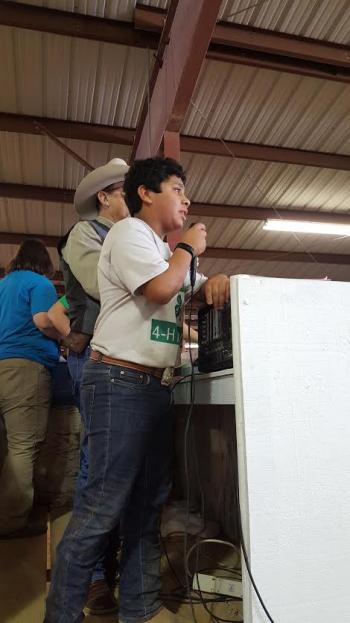 Ethan Jose Deshotel tries out his new passion - being an auctioneer - at the parish 4-H Livestock Show at the Chauncey Pitre Barn last month. The eighth-grade student at St. Eds has hopes to take this trade and turn it into something he can do on the side for the rest of his life. (Photo courtesy of Kim Deville)

For most kids, 4-H is all about taking part in activities such as livestock shows or cooking competitions to learn leadership, citizenship and life skills. However, after being a part of this organization for five years, 13-year-old Ethan Jose Deshotel was given the opportunity to tap into a passion that most kids don’t have, and one that is even greater than his love for raising and showing sheep.
Jose said, “I first thought I wanted to try to do what an auctioneer does after watching them when I went to auctions with my dad.”
This desire though, was one that his parents - Dr. Tim and Amy Deshotel - really didn’t take too seriously at first.
“When Jose told us that he wanted to do that, we were surprised and we kind of thought it was funny,” said Amy laughing. “But, he said he had been practicing, and then we started hearing him practice in the shower.”
After spending time observing auctioneers, watching videos on the internet, and practicing in the shower and anywhere else he could, Jose reached a point where he was ready to put his skills to the test.
At the parish livestock show in January, auctioneer Ricky Duhon passed the microphone on to Jose for his first experience as an auctioneer.
Jose said, “I wasn’t too nervous when Mr. Ricky let me be the auctioneer because the atmosphere of an auction is exciting and fun. All my friends think its crazy, but I love it.”
Although Jose, who said talking fast is the hardest part of this trade, had little nerves when it came to being the auctioneer. How he performed was something his parents weren’t expecting.
Amy said, “When they decided to let Jose try it out, we were completely surprised. We had no idea that he was going to get to do that. And, then we were just so proud of how well he did.”
His parents weren’t the only ones blown away by Jose’s raw talent.
Kim Deville, Assistant Extension Agent at the LSU Ag Center in Ville Platte, said, “When I saw Jose being the auctioneer, I was very impressed. I am already so very proud of what Jose has done as a Junior Leader and for how involved he is in 4-H, but this made me even more impressed with him.”
Now, after experiencing his first taste at being an auctioneer, the Reddell native has already begun setting goals for his future.
Jose said, “After the livestock show, Mr. Ricky offered to give me lessons. I know having him teach me will definitely make me better at being an auctioneer, and hopefully I will be able to use this as a way to make extra money while I am in school. I want this to always be my side job, and my dream is to one day become the World Auctioneer Champion.”