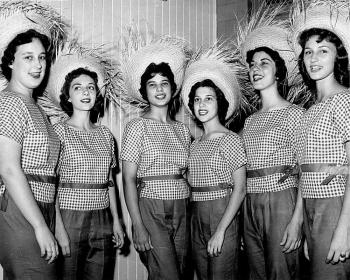 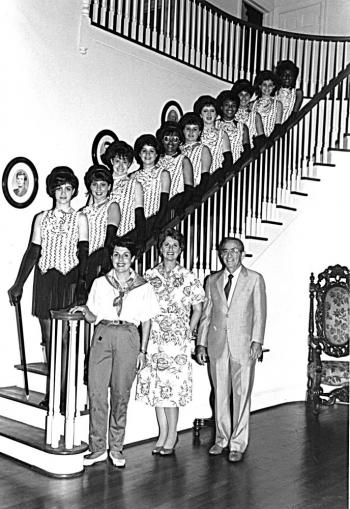 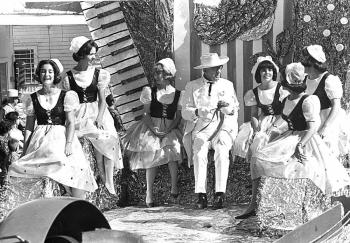 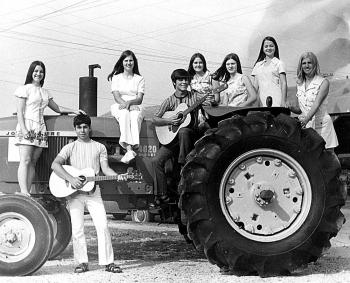 From performing classic hits like New York, New York to original songs like Cotton Picker to the Bone, the Cotton Pickers have been wowing audiences since the group was first created nearly 60 years ago.
The Cotton Pickers first began in 1957 as a part of the Cotton Festival entertainment and eventually became an act that was being asked to perform at almost every event happening in Ville Platte. Camille Fontenot, who is a former Cotton Picker and former Cotton Picker director, said, “Whether it was a parade, talent show, flower show or a beauty pageant the Cotton Pickers were there to perform.”
Not just anyone could be a part of the talented group back in the day. If you desired to sing for the Cotton Pickers, you’d first have to prove that you had the ability to captivate an audience through song during tryouts.
The ladies that were chosen to be a part of the group quickly learned that it would take hard work and dedication to be able to live up to what the Cotton Pickers had become in the community.
Not only were the ladies required to be able to harmonize and carry a sweet tune, but the girls also had to be able to learn and perform choreography to their songs.
While the group performed at a variety of events, the Cotton Festival still remained their busiest time. Fontenot said, “The girls had to be ready because we had to be at all of the event for the festival.”
Renee Brown, the current director for the Cotton Pickers and former member of the singing group, remembers how much fun performing the songs and choreography that they would learn was. “We practiced a lot to get prepared for the festival because when I was a Cotton Picker we were considered like the ambassadors to the Cotton Festival,” Brown said. “The Cotton Pickers were a big part of sharing the history here because we sang songs that were about cotton, which built this place, and about the seven evils of cotton.”
Each year, the songs that the group would perform at the festival’s many events were coordinated to go with the theme of the festival. During the time that Fontenot was a director the theme was actually decided on by the Cotton Pickers themselves. The Cotton Pickers would match their music with the theme. For instance, the 1991 festival theme was U.S.A. Proud and Strong so the group put together a list of patriotic songs to perform.
The group that was started three years after the first Cotton Festival was held, has provided the singers as well as the audiences they have performed for with life long memories. Memories for some of those girls come from an invite to sing at the World’s Fair in New Orleans in 1984.
Brown remembered, “Being a part of the Cotton Pickers gave us the opportunity to experience so many cool parties and even sing at the World’s Fair,” Brown then continued to say, “That was a really big deal because people didn’t just get to do something like that.” This trip wasn’t just a free trip for fun. The group of singers had to earn their way there. Fontenot, who was a director at the time, explained, “We were invited to go but we had to pay our way. So each on of those girls stood out on the street trying to take up donations and just doing whatever they could to raise enough money to go to New Orleans.”
The trip has left Fontenot with stories that she could barely even tell because she laughed so hard as she tried to describe their time in New Orleans. She remembered her star in the group experiencing stage fright at one of their biggest venues to sing. “Tasha (LaHaye) stepped up to the front of the stage and said “hey y’all,” because that was the beginning of our act,” Fontenot said. “The crowd responded back to her with a loud “hey” and I don’t think she was expecting that at all. She just froze up.”
They group was able to eventually get their Cotton Picker sister back on track. After that, the girls “did so good,” said Fontenot.
The bond that these girls were able to create with one another as Cotton Pickers is something that Brown also considers a treat. “I took our current Cotton Pickers group out to eat last night and ended up seeing two ladies that I was a Cotton Picker with,” Brown said. “I got them to come meet our current Cotton Pickers and it made us start reminiscing about our time as Cotton Pickers.”
“Everything we did together was fun, even practice,” Brown said. “Each group became a real sister hood with a strong bond.”
Today, no auditions are required to be a part of the Cotton Pickers because there are so many other activities that kids are involved in that it has become difficult to find participants. Brown for one is hoping to lead the group back to prominence. “Even though it is harder to find girls to participate today, we still have a great group of really young girls,” Brown said. “We are trying to build it back up again with the talented girls we have right now because I remember how much of an honor it was for me to get to be a part of the Cotton Pickers and I want our girls to experience that.”