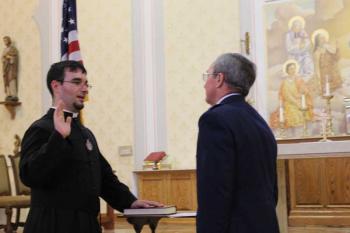 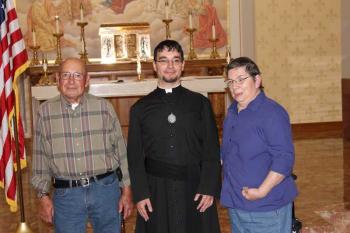 Fr. Guillory is shown here after taking the oath of office, with is parents, James Coral and Virginia of Vidrine.

Fr. Brad Guillory doesn’t know where his decision will lead to, but it will probably be far from here, in one of the numerous U.S. military installations around the world in need of a Catholic chaplain.
Guillory graduated from Vidrine High School in 1999 and then entered seminary school, where he first heard about the chaplain corps from visiting recruiters. But he was too involved with his studies to give it much thought.
He was appointed to serve at our Lady Queen of All Saints Catholic Church soon after being ordained in June of 2009. He began to take seriously the idea of being a chaplain about a year ago, when his brother, Barry, retired after 24 years in the Air Force. “He looked at me and said I should be in the chaplain corps,” Guillory said.
After further consultations in person, on the phone and online, he determined that instead of being a part-time chaplain with a state-based unit, such as the Louisiana Air National Guard, he would make it a full-time commitment, so he began to seek a commission for active duty in the chaplain corps.
He contacted the U.S. Air Force recruiting office, and began the process of obtaining permission from the Diocese of Lafayette to enter the chaplain corps.
Fr. Guillory will remain under the jurisdiction of -- or incardinated in -- the Diocese of Lafayette under Bishop Michael Jarrell and will not change that affiliation as he moves during his active duty service. But Bishop Jarrell released Fr. Guillory for service in the chaplain corps.
He will be officially on loan to the Roman Catholic Archdiocese for the Military Services, USA, under Archbishop Timothy P. Broglio, who has offices in Washington, D.C. One of the biggest changes Guillory will encounter in the chaplain corps is that his congregation will be constantly changing as military personnel are transferred in and out of the installation where he is assigned.
He started the transition process in March of last year, and was told that process would take up to a year. But he was told that during that process, the military did not want him to disclose the pending transition into the chaplain corps. He said somehow word got into the community, and he has had to decline to answer questions about that when people have come up to him in public to ask if he is leaving Ville Platte.
That changed during one of the last steps in the process -- taking of the oath of office, led by retired Air Force General Ben Soileau of Ville Platte, on Monday, February 9, in Our Lady Queen of All Saints Catholic Church. The day before he took the oath of office, Fr. Guillory told his congregation, during Sunday Mass, of he steps he’s taking to join the chaplain corps.
Now it’s up to the military to process the paperwork, commission Guillory as a chaplain with the rank of captain in the Air Force, and determine where the greatest need is, and then assign him to that location.
And the need is substantial. The 250 Catholic chaplains in the chaplain corps comprise only eight percent of the entire chaplain corps, including all faiths. Those 250 Catholic chaplains serve 1.8 million Catholics who are in uniform.
And now that the military isn’t putting a hold on public disclosure of his official status, Fr. Guillory said he will let the local congregation know where he will be stationed when he knows where that will be.
He will be expected to make a five-year commitment to the chaplain corps, then he can opt to stay in for 20 years and become eligible to retire.