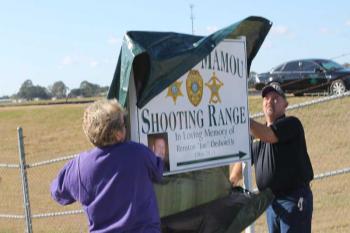 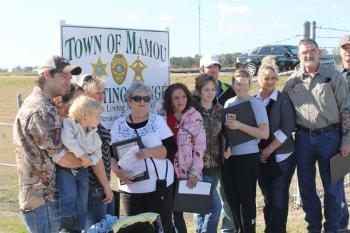 Deshotel's family gathers at the sign, which has Deshotel's name and photo, after the unveiling. 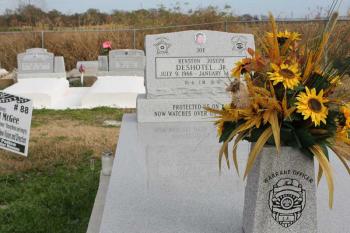 Deshotel’s grave reflects his lifelong association with protecting his community, as a fire fighter as well as law enforcement officer. 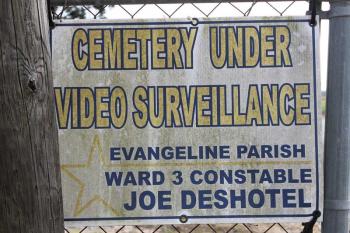 Deshotel brought signs he had paid for himself to cemeteries where he would patrol, causing incidents of vandalism to decrease. One of his signs overlooks his grave near Mamou.

People came together in Mamou recently for one last official tribute to a person who died nearly a year earlier after a life of being devoted to the safety and security of the residents of that community.
They dedicated the shooting range in Mamou, used by a number of local and state law enforcement officers, to Joe Deshotel Jr., who died last January.
Deshotel was Ward 3 constable, part-time deputy for the sheriff’s office here, and warrant officer and inmate superisor at Mamou. Desotel was named Policeman of the Year in 2009 and 2010. He had been a member of the Mamou Volunteer Fire Department, and he was named Fireman of the Year in 1995.
His wife of 10 years, Vanessa, said “He lived life to the fullest,” and had “a very contageous smile,” adding, “There was never a dull moment with him.” She also said, “He loved life and his family.”
She said he took particular interest in stopping vandalism at rural cemeteries. He would patrol them randomly in an off-road vehicle he would carry in the bed of his constable’s patrol truck. He placed his own deer cameras in cemeteries. He also stopped young people from self-destructive behavior, such as underage drinking.
Deshotel’s grave is within sight of one of the signs he placed in cemeteries, also at his expense, warning that “CEMETERY UNDER VIDEO SURVEILLANCE,” with his name and official title underneath. Vanessa said incidents of vandalism at cemeteries noticably decreased when he started patrolling the cemeteries and put up the signs.
Deshotel’s grave itself has symbols of his official duties and the inscription, “Protected us on Earth” and “Now watches over us from Heaven.”
Thirty-five law enforcement patrol cars “from parishes around Evangeline Parish and beyond,” as one person described it, took part in Deshotel’s funeral procession last January. Fire fighters provided a giant water archway for the funeral procession.
Brent Zackery, who had worked with Deshotel as a Mamou police officer several years ago but more recently has been an Elton police officer, recently won the election to follow Vanessa, who is now serving the final weeks of her husband’s term as constable.
During a recent interview, Zackery said he remembers that Deshotel was “real friendly” and “treated everyone fairly.” Deshotel applied his sense of humor to pranks played on his fellow officers, such as turning on their patrol car lights when they weren’t looking.
But on more serious occasions, he would use his sense of humor to calm down a person who was acting hostile. Zackery said Deshotel never exceeded the proper amount of force necessary to subdue a person who had to be restrained.
Survivors, beside his widow, include daughters Krystal Paige and Mollie Beth Deshotel, his parents, Renston J. Sr. and Jenny Deshotel of Mamou, sisters Leisa and Tiffany, and others.