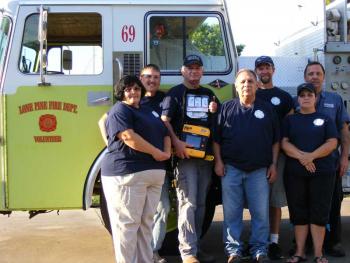 The Lone Pine Fire Protection District was deactivated in 2003 due to lack of support and funding. With the help from Bryan Vidrine of the Evangeline Parish Police Jury, a property tax proposal was placed on the ballot. The voters of the district passed a 20 mill property tax in April 2012 and the fire department was reorganized. In the summer of 2012, the district started with a pumper and four self-contained breathing apparatuses. Thanks to the generosity of many agencies throughout Evangeline Parish, the district received necessary equipment in order to be eligible to apply to be recognized as a functioning fire department.
Some of the equipment provided by various agencies throughout the parish included the following:
•Through grants, the Evangeline Parish Emergency and Operations Center provided the district with pagers for communication and turnout gear for the protection of firefighters.
•Ward Five Fire Protection District provides the district with the use of a radio repeater.
•Ward Four Fire Protection District donated a brush truck capable of extinguishing small grass and woodland fires.
•The Louisiana Department of Agriculture leased the District a 2,300 gallon tanker for water shuttling activities.
In August 2013, the district applied for and was granted a bond through the Louisiana State Bond Commission to be used for the purchase of firefighting equipment, and repairs and maintenance for buildings and vehicles. Some of the proceeds from the bond were used for the purchase of radios for the apparatuses, hand held radios and other required equipment necessary to operate as a functioning fire department. The district plans to use the remaining portion of the bond for the acquisition of a tanker.
Firefighters are required to receive a minimum of 12 hours of structure firefighting training annually. Normally, the training is hosted by Ward Five Fire Protection District and administered by the LSU Fire and Emergency Training Institute. This training can also be obtained by in-service training provided by the district. Firefighters are also required to attend a 12-hour driving course every two years.
With the supervision of Ward Five Fire Protection District Chief Bobby Guilbeau, the Lone Pine Fire Protection District was recognized by the Property Insurance Association of Louisiana, effective September 8, 2014, as a Class nine rating. This rating allows the residents of the district to secure homeowners insurance at a reduced premium.
When called upon, the district will also respond to medical emergencies. To better serve the community, the district recently purchased a Medtronic Lifepak 1000, automatic electronic defibrillator (AED), that is compatible with Acadian Ambulance and Air Med. This AED will allow a firefighter to provide immediate medical assistance to a heart attack patient while Acadian Ambulance is in route. The district is prohibited from using public funds to purchase anything other than firefighting equipment. The purchase of this equipment would not have been possible without donations received from Tunica-Biloxi Tribe of Louisiana/Paragon Casino Resort, Firefighters Charitable Foundation, Cleco Corporation, Winfield Solutions LLC, Chuck West, attorney-at-law and other personal donations and contributions through BBQ and raffle tickets.
The district’s future plans are to have firefighters qualify as first responders as soon as a course is made available.
The district serves approximately 500 residents and covers 11 square miles located in northeast Evangeline Parish.