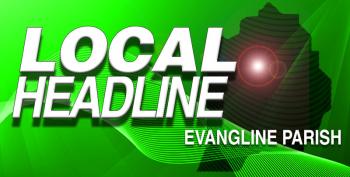 A novel, “Twice a Slave,” based on factual accounts of the founder of Calvary Baptist Church in Bayou Chicot, has just been published, co-authored by Randy Willis, fourth great grandson of the man who became known as “The Apostle to Opelousas,” Joseph Willis, who founded other churches in south Louisiana.
Much of the book is about Willis’ life in North Carolina, where he grew up as the son of a wealthy white plantation owner and a Cherokee slave woman.
Considered a slave himself, his own family took him to court to take his inheritance from him as the Revolutionary War started. He fought in that war under Francis Marion, The Swamp Fox.
After he married twice, losing both women to death, he went west, crossing the Mississippi River at Natchez. After a perilous river crossing, he met an Indian whom he told his destination was Bayou Chicot, where he had heard that many traders had passed through. He told people God had directed him to south Louisiana territory to preach His word.
The Indian took him to another Choctaw Indian’s mud and bark cabin in Bayou Chicot.
He bought land in Bayou Chicot, according to courthouse records filed in Opelousas, about a year before the Mississippi Baptist Association was formed in 1806. In 1810, Willis left Louisiana, crossing the Mississippi River at Natchez, according to a later account by his son, to seek ordination before establishing a church.
But he was turned down because he was of mixed race, or in the words of the association, of “humble social position.” But the association finally relented, ordaining Willis and, on November 13, 1812, he established the Calvary Baptist Church in Bayou Chicot. That was less than six months after the start of the War of 1812 and only about seven months after Louisiana became the nation’s 18th state.
While Calvary Baptist Church was not the first Baptist church in Louisiana, it is believed to be the first in Louisiana west of the Mississippi River.
Willis, the co-author of the just-published novel, wrote in a copyrighted essay that Mabel Thompson of Ville Platte had a diary kept by her great-grandfather, a teacher. That diary had a description of the early settlement. The diary states “Chicot’s chief attraction was it had an abundance of natural resources, such as timber, good water, wild game, good soil and friendly Indians... Chicot became a trading center for a large territory extending as far West as the Sabine River, serving Indians, trappers, Frontiersmen, homesteaders, as well as plantation owners.”
Joseph Willis’ third wife died and was buried in Bayou Chico, and he went on to have a fourth wife, Elvy Sweat, with whom he had two children. Willis was 79 when the youngest of those two, Aimuewell, was born. Aimuewell Willis died in September 1937, when he was 100 years old.
Joseph Willis died in September of 1854, in Blanche, Louisiana, and was buried in the Occupy Baptist Church cemetery. It was there, on a freezing day in January 1955, where 16 ministers and 250 people were present for the unveiling of a monument in his honor.
For more information about the book, go to www.josephwillis.net. To buy the book e-mail: twiceaslave@austin.rr.com or call 512-565-0161.