Pathways of Hope comforts parents of children who have died 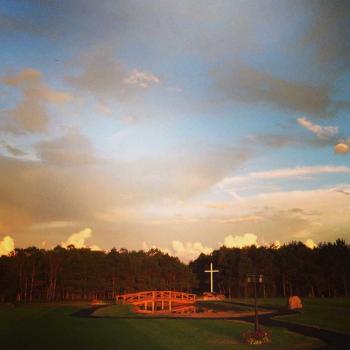 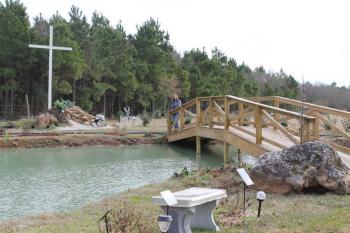 Kim Bourgeois stands on the bridge that symbolizes the transit to the afterlife and to reuniting with loved ones who have gone before. In the foreground are memorial markers and bench. The cross in the background is painted with white paint containing crystals that create a dramatic effect when lighted in the twilight. 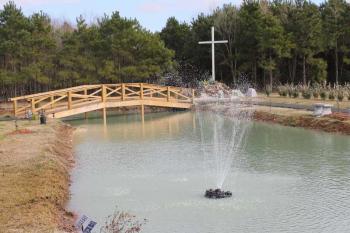 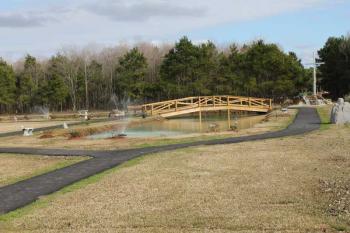 Walkways pass by memorials parents have placed in memory of their lost children.

Kim Bourgeois of Eunice has turned a profound personal loss into a place of comfort for many who have experienced a similar tragedy -- the loss of a child.
It’s called “Pathways of Hope,” a walking trail off Tiger Lane between Vidrine and Mamoou. The path is where Bourgeois and others whose children have died can “walk it out to a journey home,” which is where they will “reunite in heaven.”
Along the way are 50 -- so far -- memorials to children who have died. The memorials take different forms, such as plaques or memorial benches. There are also two fountains, a gazebo, lighting fixtures, and a bridge where people cross over what she calls “living water” to the final stop. That central feature includes a large cross that glows when lighted in the evenings. The cross is a reminder that “Jesus laid down his life,” Bourgeois said, adding, “and he rose again.”
The inspiration came shortly after her only son, Ryan Blake Dunn, died July 16, 2010, of hypoglycemia. Dunn manned a crew boat and was two weeks short of being a captain.
Then she received her son’s final paycheck. “I cried and asked God what to do with it. I didn’t want to do something meaningless,” she said. “I closed my eyes and saw a vision of pathways.”
She used money from the paycheck, money from the sale of her son’s property and donations, starting the project last August on three acres donated by her mother, Rebecca Lafleur off Tiger Lane.
With the help of her brother, Tim Dupre, the project was completed by November 23.
It didn’t take long for word about the calming effects of visiting the Pathways of Hope spread. Parents from Pine Prairie, Ville Platte, Mamou and Lake Charles are among the dozens who have placed memorials there. People have come from as far away as Miami, Florida, and New Jersey to place memorials there.
Sometimes people will be referred to Pathways of Hope by their church. Often, it’s just someone who knows where people can go for consolation after the loss of a child.
“I didn’t think this would become as important as it is to a lot of people, but it is,” she said, adding the first question people ask is where they can get a memorial. She refers them to Bourque Signs in Eunice.
Bourgeois said people often find more comfort at Pathways than at the cemetery where their child is buried, which some find to be a sad and lonely place. People who have visited Pathways have told her they feel much more comfort there than at a cemetery.
She has seen families or friends come to Pathways together. Sometimes people will come by themselves and find comfort in talking to others who understand their grief on a personal level. Sometimes, she’ll see someone walking the path and stopping at each memorial to read the name aloud. Friends come and they may take photos or just sit on one of the memorial benches and talk. “The greatest comfort comes from one another,” Bourgeois said.
She said,” The biggest hurdle,” after the loss of a child is overcoming the feeling of finality. Instead of “every step walking away” from the past, people who have lost a child should “remember they are walking toward,” reuniting with their child.
Family members who visit Pathways have been volunteering to maintain the property with mowing, treating fire ant mounds and planting trees and shrubs.
In fact, Bourgeois has had to discourage people from planting trees because that can block views of some of the Pathways of Hope features. Instead, she encourages people to plant knockout roses and crepe myrtles.
Parents of lost children memorialized at Pathways were so eager to donate and plant there, Bourgeois had to discourage them toward the end of November because, as she pointed out to them, the plants wouldn’t survive the winter.
“We’ll begin planting again in April or May,” she said.