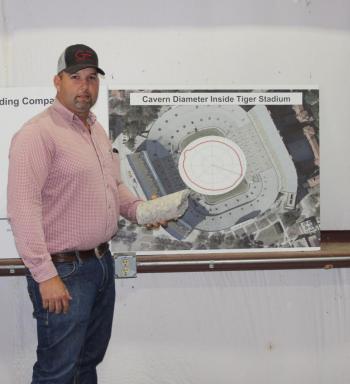 Assistant Facility Manager of Pine Prairie Energy Company Kyle Fontenot holds a core sample of salt that is used to store natural gas deep under the facility in Easton, La. He is pictured here in front of a sign depicting the size of one of Pine Prairie Energy Company’s five caverns. The cavern is 300-feet in diameter and could fit just inside LSU’s Tiger Stadium. (Gazette photo by Tony Marks)

For thousands of years, salt has been sitting under the surface of an area that is nestled off of Louisiana Highway 13 in the small community of Easton. This salt sat there untapped until Pine Prairie Energy Company came along and began to carve caverns out of the salt to store natural gas.
In the process, the company has become a pillar of the community by giving back in terms of natural gas to power local electric companies and financial contributions to local municipalities and civic organizations.
“We actually have an agreement with Acadia Power south of Eunice,” said assistant plant manager Kyle Fontenot. It’s a CLECO plant and an Entergy plant. We furnish them gas on a daily basis. There is a current project going to CLECO in St. Landry.”
Ed Benoit serves as facility engineer and explained the benefits of the company providing natural gas to CLECO. “We give them a sustained fuel supply in the event of a hurricane or pipeline interruption,” he said. “If a hurricane comes in and the pipelines shut off and the offshore platform shuts off, then we are able to supply CLECO the fuel they need to generate their power.”
In addition to generating power for CLECO, Pine Prairie Energy Company generates tax revenue for the state and the parish. According to Benoit, “we guarantee $250 thousand a year in title taxes. Last year we contributed $1.6 million worth of taxes.”
Pine Prairie Energy Company employs 300 people during times of construction and has 19 full-time employees. “We have eight operators, electricians, instrumentation folks, and mechanics to keep all of our equipment running,” Fontenot said. “You could put a dot in the center of Evangeline Parish, and we come from all around that dot. That was the understanding in the early days of the plant that we would hire local folks, and we’ve stuck to that.”
Benoit said, “We also permanently employ two contract employees, and we bring in temporary contract workers to do all of these projects. In addition to our revenues that we generate, those guys are living here, renting trailers, and purchasing food in the parish which generates additional revenues.”
“We purchase local when we can, specifically with Cameron Iron Works,” he continued. “Ninety-eight percent of the valves here were purchased” from that Ville Platte manufacturer.”
When it comes to financial contributions, Benoit said that Pine Prairie Energy Company is “very active in our local parish governments and civic and sports organizations.” He added, “We previously endowed a full pay of some old school bonds at Pine Prairie High School. We donate to local fire and police departments. We are in the process of helping the fire chief in Ville Platte purchase a new vehicle to make his rounds. Mamou Police Department had some very old radio systems, so we are helping them upgrade, and Pine Prairie got a new tanker trunk for the fire department.”
The salt that makes everything possible was first encountered when oil and gas operators like Gulf and Amaco were drilling for oil and natural gas. “It was discovered at that time, but really nobody had a use for the salt in our territory,” Fontenot said. “The company knew to come here because of geology. They had all of the geological surveys and data from years ago whenever the oil and gas wells were drilled.”
Fontenot explained the leaching process that creates the caverns that stores the gas. “The salt is our storage container,” he said. “When people picture salt, they think of it as granular like what we sprinkle on food, but it’s actually a rock that has a greater integrity of any container you can store it in.”
“We put fresh water in the salt and dissolve it, and it comes back to us as brine water,” he continued. “It’s an extraction process that creates the cavern. We encounter salt when we’re drilling here at about 500-600 feet. We drill on down to 6,000-feet, and then we develop our caverns by working up. The roof of our caverns are around 4,000-feet, and the bottom of our caverns, once they are developed and the rubble settles at the bottom, is about 5,500-feet. Our caverns are about 1,200-1500 feet tall but are 4,000-feet deep.”
Each cavern is 300-feet in diameter and could fit squarely inside LSU’s Tiger Stadium. Pine Prairie Energy Company currently has five such caverns and is prepared to build two more caverns. The dimensions of the salt is 1.8 miles by 1.3 miles which gives the company the potential for a total of 17 caverns.
Benoit said with the current amount of gas that is stored in the five caverns, “we could keep the State of Louisiana going for 15 days. We could keep Texas going for about six days, the City of Houston for about 12 days, and New York for about 17 days.”
Fontenot then touched upon the safety measures that are in place in light of the Bayou Corne sinkhole. “The regulations were rewritten after the Bayou Corne incident, and we had to send in documentation to the state,” he said. “There were no variances in our plans. We had done things in the beginning, and we had knowledgeable folks in the developmental stages to make sure that protective measures were put into place way ahead. Whenever the new regulations came out, it did not affect us. We were ahead of the game, and we were proactive in a lot of safety measures. We run a very tight ship.”
The tight ship that Pine Prairie Energy Company runs looks to sail into the future on a current $50 million project. “Our compressor building is being extended out,” Fontenot said. “We currently have four compressors that are responsible for taking gas off our pipelines and storing it into the wells, and we’re adding four more compressors. It’s not a stale plant. It’s a plant that we’re continuing to expand.”