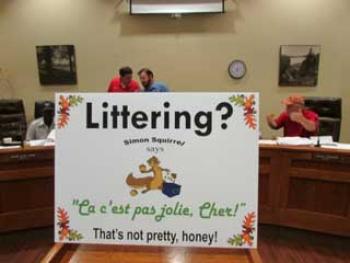 People will begin seeing signs like this around parish

The Evangeline Parish Police Jury heard of efforts being made to involve the public in reducing littering in the parish during its monthly committee meeting session on Monday, November 4.
Nina David, president of Keep Evangeline Beautiful, and Camille Fontenot, executive director of the Evangeline  Parish Tourism Commission, said people are being asked to discuss the need to speak about littering on KVPI as part of Greater American Cleanup Day on November 15.
They left signs for jurors to place in their districts that discourage littering. David said make a bad impression on visitors to the parish, particularly during large events, like baseball tournaments or festivals. “It impacts our tourism,” she said.
The jurors discussed fines that can be assessed against people who litter. Juror Lamar Johnson said state game wardens enforce littering ordinances and that the litter itself can often identify who is responsible for littering.
Bryan Vidrine, police jury president, said people can receive a $200 reward for providing information leading to people who violate the parish’s littering ordinance being issued a citation.
Juror Richard Thomas said he found the name of a person who had littered in his district and reported it, “but nothing happened,” he said, adding, “I was wasting my time, really.” Juror Kenny Burgess said he had gone to the home of persons he had identified as littering and asked them to remove the litter.
Johnson said younger people can be taught not to litter but that efforts to stop older people from littering are less successful.
The police jury approved the latest version of the parish’s Policy and Procedures Manual after Donald Bergeron, police jury secretary/treasurer, said he had removed requirements for additional paperwork required of road crew supervisors. Juror Johnson, who had objected at previous police jury meetings to the increase in paperwork required by an earlier version of the manual, said he was satisfied the problem had been corrected.
Bergeron has said auditors advised the police jury to produce a written manual to ensure employees are aware of procedures. Vidrine asked Bergeron to provide copies of the manual to all parish departments and employees.
Vidrine briefed the police jury on a public hearing of the  Louisiana Department of Transportation and Development recently. He said he expressed his concern that Evangeline Parish got “the least amount of any parish,” apparently due to lack of interstate highways or large metropolitan areas in the parish.
Vidrine read from a list of road improvement projects in the parish that are due to be let for bids in 2014. Those include $541,000 for a section of Highway 104, $6 million for Louisiana Highway 374, $2 million for Louisiana Highway 95, $1.38 million for a bridge on Louisiana Highway 104, $1 million for Highway 748, $2.2 million for Louisiana Highway 104 and $14 million for Louisiana Highway 10, from Vidrine to the parish line toward Oakdale.
He also said improvements to Louisiana Highway 106 were in the “planning stage.” Vidrine said the parish will send DOTD officials accident records from the sheriff’s office that show that highway presents a public hazard, in hopes of expediting improvements on that road.
He said the police jury office has a map of the scheduled road improvements.
In other police jury business:
•Bergeron said he received an estimate of nearly $17,000 to repair a crack running through the center of the Evangeline Parish Health Unit building foundation. Jurors asked Ronnie Landreneau, the police jury consulting engineer, to evaluate the cracked foundation and asked Bergeron to see if he can request estimates from other companies.
•The police jury approved a 25-year lease for a building at the industrial park to Cameron for a lump sum of $275,000. The lease agreement was based on the previous lease, which expired about three months ago.
•Crooked Creek Manager Ken Johnson briefed the police jury on winter operations there. He said people will not have to make reservations starting December 1 and that people can park campers on a “first come first served” basis. Reservations will resume early next year. A phone message will inform people calling Crooked Creek of the suspension of reservations.
•Juror Kenny Burgess briefed the police jury on problems keeping 18-wheelers off Morning Glory Road, which connects Highway 190 and Old Basile Highway west of Basile. He said the large rigs have become stuck on railroad tracks that run along an inclined base, causing railroad traffic to stop. Burgess said signs on either end of the road caution 18-wheeler drivers not to pass through the road and he discussed the possibility of assessing fines for drivers who get stuck there.