The science of Fleas and Flies 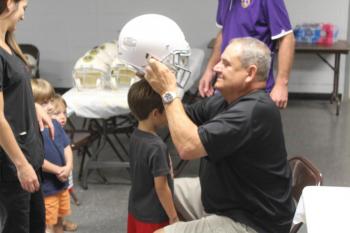 The past and the present of the annual Flea Fly game met Monday during the first night of registration in the Lion’s Club building as former coach Dess Fontenot (right) crowns current player Jules Bischoff (left) with his helmet. Bischoff is the son of Julius and Alaina Launey Bischoff. (Gazette photo by Tony Marks)

Out of the ashes of one civic organization in Ville Platte survived a youth football game that has grown in popularity as it continues to attract generations of Fleas and Flies.
The annual Flea Fly game began under the direction of the Ville Platte Jaycees. “I believe other areas especially Opelousas were doing the Fleas and the Flies, and the Jaycees just promoted it here instead of the kids going to Opelousas,” said former coach and Lion’s Club member Dess Fontenot.
“We just picked it up where it left off with the Jaycees,” said Lion’s Club member Sammy LaFleur. “I don’t know why the teams are called Fleas and Flies.”
While the origin of the teams’ names are unknown, what is known is how the game transitioned between the Jaycees and the Lion’s Club.
“It was already in place when I joined the Jaycees,” said LaFleur. “We probably did the project another 12 or 15 years until the Jaycees went out of business. One of the members was storing all the equipment up in his attic, and it stayed there for probably two or three years.”
“Then I joined the Lion’s Club, and I asked the club if they would be interested in taking this project,” added LaFleur. “That’s when we started it, and we upgraded the equipment.”
Fontenot was a coach of the Fleas and the Flies for 10 years. “I started in 1978 or 1979, and it was the Jaycees that were sponsoring it,” he said. “Looking back when we first started, we might have had 22 or 25 players on each team. We’d mix the five-year-olds and the six-year-olds, and we just had two teams back then.”
Having two teams that large created logistical problems in the way that the game was played. As LaFleur said, “When you have teams that large, it’s hard to organize and set up a play.”
“You can’t run the plays, and you can’t get a lot of people involved,” Fontenot said. “When the Lion’s Club took it over, we decided to do two, five-year-old teams and two, six-year-old teams, and the numbers really are about the same because now we have about 10 or 12 on each team.”
Another change over the years has been the color schemes of the teams. “The Fleas and the Flies used to always be red and blue,” explained LaFleur. “Dess wanted to change it to the LSU colors, so we went to purple and gold.”
Aside from cosmetic changes, the biggest change over the years has been how the game is played. “Instead of playing four quarters, they each play two quarters,” Fontenot said. “It gives more kids a chance to run with the ball. It’s not your same three or four people.”
While the game has undergone several changes over the years, what has unchanged is the unwavering support from the community. “I don’t know very many kids that don’t play Flea Fly,” Fontenot said.
“The kids that Dess coached are now dads and are coaching also,” LaFleur said. “That’s how many generations it’s gone through.”
“If I don’t put something in the paper or publicize it at Sacred Heart, it’s the mommas not the daddies that call me and want to know when Flea Fly is so their little boy could play,” Fontenot said. “It’s amazing because they know Flea Fly is coming.”
The weekend of the Flea Fly game begins with an exhibition game during half time of the Sacred Heart football game that Friday night.
According to LaFleur, “It’s exciting for them to be on that big field under the lights.”
“The kids are excited because they’re in front of the Sacred Heart crowd, and then this year it’s special because the kids will be able to ride in the parade,” added Fontenot.”
The game years ago was always the same weekend of the Firemen’s Parade that rolled down Main Street in Ville Platte in early October. The game now is coordinated between Sacred Heart home games and the Cotton Festival.
“Sacred Heart pretty much dictates the weekend we can have it,” explained LaFleur.
“It doesn’t always work out if Sacred Heart doesn’t have a home game,” said Fontenot. “We always try to do it at the beginning of October, but sometimes we have to do it later so we miss the Cotton Festival.”
Fontenot explained how he got the game scheduled for the Cotton Festival this year. “This year we got lucky because I didn’t check with anybody,” he said. “I just said this is the weekend we’re going to have it because Sacred Heart’s opponent doesn’t look like they’re very good. I said that’s the best time to have Flea Fly because it’ll help the crowd, and it just happened to be that I hit it lucky because it’s the Cotton Festival weekend.”
The game has its own unique set of game rules. As LaFleur said, “We stopped with the clock, now we run an equal number of series. Each team runs four plays.”
“You run your four plays, and you have to score,” said Fontenot. “There are no turnovers. If you fumble and recover, you lose a down. We pretty much let them play and have fun.”
The Flea Fly game is kept alive through the hard work of the Ville Platte Lion’s Club who supports the community through its two major events which are the Lion’s Club Crippled Children Camp and the Louisiana Eye Foundation. The game is also kept alive through the generous sponsors.
“We have all kind of people helping us just like typical Ville Platte people,” said Fontenot. “The sponsors are different every year. We try to get six sponsors every year, and that pretty much pays for the jerseys that the kids get to keep. We got it pretty much down to a science.”