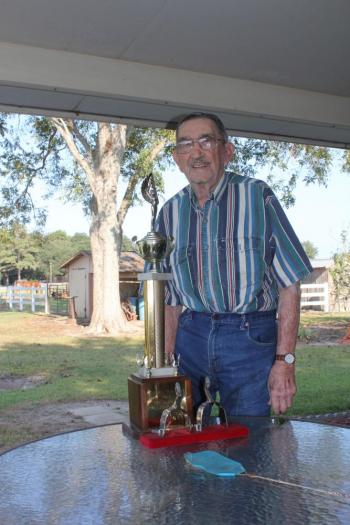 Former Tournoi rider Gerald Fontenot poses for a picture with the champion’s trophy and spurs that he won during the 1967 Louisiana Tournoi competition. (Gazette photo by Elizabeth West)

Every October, on a Sunday afternoon, a group of Tournoi riders get ready to don a knights traditional garb, saddle up on horseback and spear through the seven enemies of cotton.
Today is that day for the 2017 riders; but 50 years ago, this day was the day that former Tournoi rider Gerald Fontenot would accomplish a goal that each competitor dreams of achieving.
This unique to Ville Platte competition is one that was brought to the area in the early 1800’s and after two short periods of the event not being held, it was revived in 1952. However, it wasn’t until 1957 that Fon tenot began to compete.
Stiff competition and the competitive nature of the riders made Fontenot work so hard for his title that it took 10 attempts before the Ville Platte native would capture the coveted Tournoi Champion Trophy and spurs.
Fontenot remembered, “Audrey Guillory was one of the best riders from when I rode. He won the Tournoi quite a few times. But, I finally got my win in 1967. It took a lot of practice though.”
To earn his first and only title, Fontenot said he had to begin preparing for the competition months in advance. The most important thing, according to the 89-year-old Ville Platte native, was to make sure your horse knew the track.
Fontenot said, “I would start practicing for the competition a few months in advance, because you had to make sure your horse learned the track. The horse had to learn to stay within a track 28 to 30 inches wide. That’s not very big.”
The year Fontenot won though, his horse had learned the track well. It was reported in the Ville Platte Gazette following the tournament that Fontenot was “dubbed knight of ancient Tournoi” with “an average time of 12.4 seconds in the three grueling rounds and picked up 18 of a possible 21 rings for a score of 92.0.”
One thing Fontenot remembers most about that day was the atmosphere in the stadium.
Fontenot said, “In those days Tournoi was run at Ville Platte High’s football stadium, and the people would fill the stadium. You could hear lots of cheering which made it exciting. The excitement is what I remember about when I won. That, and the ball to celebrate after, which they still do today.”
While 50 years ago was the only time Fontenot won Tournoi, on display in his living room on each side of his champion trophy are other awards he earned during his years of participating in this historic sport. Those awards include what a 1967 edition of The Gazette called the “coveted fast time trophy” and the sportsmanship trophy. He also placed fourth twice and third one time in the tournament.
Not many years after Fontenot’s shining Tournoi moment, the father and husband decided to give the sport up so that it could be his son Collins’ turn.
Fontenot said, “As much as I loved the action and competing, when my son started running Tournoi, I decided I would stop. I had my time, and I didn’t want to compete against my son.”
He may have been out of the saddle on Tournoi day, but he wasn’t out of Tournoi completely.
Fontenot then began to be to time keeper for the tournament, which he says he did up until just a few years ago.
“Tournoi is a really unique thing,” said Fontenot. “That’s why I stayed involved by being the time keeper. I just stopped doing that a couple of years ago.”
Today, Fontenot may not ride the semi circular track, and he may not keep the time of the new generation of riders, but his love for this cherished tradition is still present.
Fontenot said, “If I could ride today, I would. I still love the Tournoi and am very interested in it. It is something special, especially because the riders in my day were all friends. It was friendly competition going on, and it is still like that today.”
To experience this unique ancient tradition, head out to Industrial Park in Ville Platte today, where the tournament will begin at 2:00 p.m.