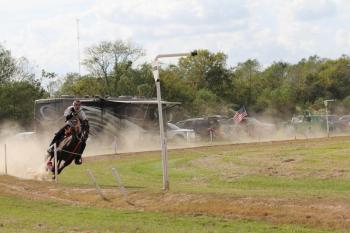 Pictured is the 2017 Tournoi Champion Eric Guillory during his first round of this year’s competition. The Vidrine native earned his sixth straight Tournoi title with a total of 20 caught rings. (Gazette photo by Elizabeth West)

A stud can be defined as a place where horses are bred. However, if you consider the Guillory family compound a stud, then they are breeding Tournoi champions instead of horses.
Their successes were once again seen during this year’s Le Tournoi, as the top two prize getters haled from the Guillory family, whose Louisiana Tournoi roots run deep.
Following in the footsteps of his grandfather and former Tournoi champ, Winston Guillory, and his father and former champ, Kent Guillory, Eric Guillory claimed the 2017 Le Tournoi title for the sixth time in a row.
His earnings however, didn’t come easy as he entered his final ride of the tournament in a do or die position.
Eric had collected a total of seven rings in the first round of this year’s Tournoi. However, in round two, the seasoned rider fell short of capturing all seven rings and opened the door for two other competitors that were right on the heals of the five time defending champ.
Those competitors were Ryan Haller and Eric’s cousin, Marcus Guillory.
Haller had speared seven rings during his first two rides around the semi circular track at Industrial Park.
Going into his third round, Haller was unable to keep the momentum, and unfortunately missed one ring during his final ride. This brought Haller, who ended up placing third overall, to a total of 20 rings collected during the competition.
Eric said, “I was worried up until he missed that ring.”
Haller’s miss in the final round forced him to be out of the race for first place because his times were slower than that of Marcus and Eric.
“At that moment,” Eric said, “I was thinking he gave me a chance and I was going to make him pay for it.”
The competition then came down to cousins Eric and Marcus, who ended up earning second place on Sunday.
Marcus caught a total of 20 rings, with his times being 12.69 seconds in round one, 12.53 in round two, and 12.44 in round three.
Atop his horse, General Lee, Eric prepared for a make or break moment going into round three, for if he missed one ring, his five year history making winning streak would come to an end.
Eric said, “I told myself, ‘Just catch them one ring at a time.’”
The 22-year-old Vidrine native did just that and caught all seven rings suspended around the quarter mile track in the fastest time to clench the 2017 Tournoi title and trophy donated by the Ville Platte Gazette. He also received a saddle donated by JLS Speed Horse Ranch, Inc. in memory of Alyssa Guillory. Along with being dubbed the King of Tournoi, Eric and General Lee also earned the award for fastest time with a time of 12.41 seconds in round one, 12.34 in round two, and 12.47 in round three.
With another win under his belt, Eric said, “I am competitive and I don’t like to lose, so my goal is to win more times than Mitch Soileau. He has the most wins right now, and I want to beat him.”
Soileau has a total of 10 Tournoi wins, therefore Eric still has five more titles to go before he can become the champion of all champs with the most wins.
Others who placed in the top five were Kent Saucier, who placed fourth with a total of 19 rings, and Alex Haller, who placed fifth with a total of 19 rings. Bryce Johnson also earned the sportsmanship award after he took a hard fall during round two, which resulted in a broken arm.
For more pictures of the winners with their awards, pick up a copy of the Sunday, October 22, 2017, edition of The Gazette.