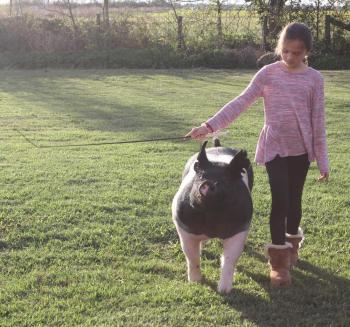 Olivia Soileau stick trains a show pig outside of her grandparents’ barn on Thursday. The nine-year-old recently completed her first year as a 4-H member earning several livestock awards at the Parish, District and State levels. (Gazette photo by Elizabeth West) 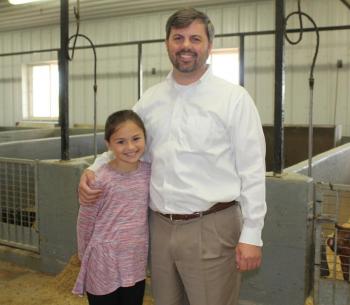 Olivia Soileau (left) and her dad Gabe (right) pose for a picture together inside their family’s barn after checking up on her Duroc pig or red pig that she plans to show in Iowa this summer. (Gazette photo by Elizabeth West)

Olivia Soileau might wear UGG boots and pink bows in her braided hair, but don’t let that fool you. The nine-year-old dancer by day, spends her afternoons in the barn with pigs - show pigs that is.
While in her grandparents’ (Kenneth and Gwen Soileau) barn on Chataignier Road, which sometimes houses more than 150 pigs, Olivia’s girly side grooms the ones with potential to perfection and her competitive side trains her choice of show pig to become a champion.
Olivia’s main stage over the past year to show off her hard work in the pig pin has been 4-H events. With her first year as a member of the nation wide program complete, Olivia, has proven that she is a force to be reckon with when it comes to raising the perfect show pig that performs flawlessly for judges at showtime.
The young girl’s success in her first year of 4-H is something that the fourth grade student at Mt. Carmel still finds herself a little shocked over.
Olivia said, “I was surprised each time I won, and I am still surprised that I did it because most people don’t win their first year showing pigs.”
Her surprise also came from the fact that her first attempt at showing pigs before becoming a part of 4-H didn’t turn out as well as her later showings would.
Last summer, with her dad Gabe, of Ville Platte, by her side, Soileau traveled to Des Moines, Iowa, to get her real first taste at showing pigs.
Gabe said, “She was extra nervous to show in Iowa because it was literally her first time showing.”
Laughing, Olivia then added, “I had a pig named Speed Limit and it was all white. It walked really good at home, but when we got to the show in Des Moines, Iowa, and Speed Limit walked into the ring, he ran everywhere. We couldn’t get him out. I ended up getting 11th place.”
Since that showing though, the pigs that Olivia has trained and shown have become prize winning pigs that have earned the title of Grand Champion Market Swine, while Olivia earned the Grand Champion Junior Swine Showman award at the 4-H and FFA Jr. Livestock Show earlier this year.
During the Southwest District Show, Olivia’s hog earned Reserve Grand Champion and Champion La. Bred Cross Hilt Market Hog, as well as Overall Grand Champion La. Bred Market Hog. She also received $400.00 for showing the 2017 Reserve Champion La. Bred Market Hog. At the State show, Olivia won her class, which means her pig beat all of the other pigs in the same weight division.
The hardest part about raising a champion hog according to Olivia is the training process.
Olivia said, “It’s very hard to train them because they don’t like to listen sometimes, and they can act a little crazy.”
When it comes to training, Olivia stick breaks the pig to teach them how to walk properly and teach them to have good posture by training them to keep their head up while being shown. Olivia also must make sure that the pig’s appearance is perfect by adjusting her pig’s diet to make their coat and body look pristine.
Although the training side of showing pigs is difficult, Olivia plans to continue following in her father’s footsteps, who also grew up showing pigs, cattle and chickens, by showing at livestock shows even when 4-H is out.
She has fallen in love with this extracurricular activity, but it’s not just because she enjoys competing.
Olivia said, “My favorite part about showing is the friends I get to make at the shows and the time I get to spend with my dad.”
Her dad enjoys the quality time with his daughter too.
Gabe said, “I played every sport in high school, but their are two things that make this different. The first thing is, when I take Olivia to dancing, I drop her off and she gets down and gets taught how to dance by an instructor, while I sit in the car and wait for her to be done. When it comes to showing though, the parents are the instructors. The second thing is that with dance or sports you are always running the roads. This allows families to be at home with their kids.”
He then continued, “There are not a lot of things that a dad can do together with his young daughter, but this is something that we can do together and we both like it.”
When Olivia experienced her first winning show pig, her dad was proud. However, he was proud of his daughter long before the awards were handed out.
Gabe said, “I want to win just as much as anybody but we won before we got to the show. Just her being able to execute at such a high level like kids that are normally 15 to 18 made me proud. Her being able to physically do that at her age was the thing that made me the proudest.”
Olivia’s mother Caroline echoed feelings similar to Olivia’s father when it comes to watching her little girl in action in the show ring.
Caroline said, “It makes me proud when I watch Olivia enter the show ring, mostly because she shines when she’s out there. It makes my heart warm to watch her truly enjoy what she is doing.”
With one year of 4-H under her belt and the full support of her parents, Olivia has no intentions of slowing down.
When asked if showing is something she plans to continue doing for a long time, without hesitation, Olivia said, “Yes, I am going to keep showing because it’s really a lot of fun, and next year I hope to win grand champion at LSU.”