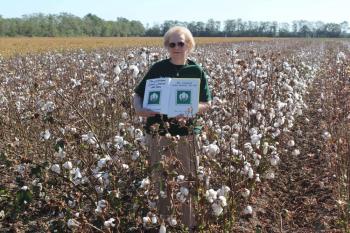 Lynn Landreneau is pictured here as she stands in Lucas Pitre’s cotton farm located on the Whiteville Road. She is holding her two books that she wrote about the Louisiana Cotton Festival. (Gazette photo by Tony Marks)

There is an old saying that cotton is the fabric of our lives. This is none truer than for Ville Platte resident Lynn Landreneau, who has compiled the rich history of the Louisiana Cotton Festival into two volumes of work.
Cotton has always been a part of Landreneau’s life. She was raised in rural Grant Parish where she “picked cotton to buy my high school graduation ring that cost $18.75 in 1953.”
After graduation, she attended college at Southwestern Louisiana Institute where she met Gary Landreneau from Ville Platte. The two were married on September 22, 1956.
Her involvement with cotton increased significantly a year later. “Gary and I lived in Morgan City,” Landreneau said. “We were teachers there, and we came back to Ville Platte. He started working at the welfare office, and I first got a job at Bayou Chicot. Gary joined the Lion’s Club, and then I joined the Ladies’ Auxiliary.”
At that time, the Ladies’ Auxiliary was sponsoring the luncheon for the Louisiana Cotton Festival. “At first I chaperoned the girls because at that time the people from the festival didn’t want those girls to be unchaperoned,” she said. “Somebody had to be with them everywhere they went.”
“Then I worked the luncheon, and I was co-chairman with Beulah Lee,” continued Landreneau. “As co-chairman, I was involved with making the corsages and was in charge of the Cotton Pickers’ outfits.”
Landreneau recalled the times when guest speakers would attend the luncheons. “Over the years, we’ve had a lot of people that were invited to be speakers, and sometimes we would have two speakers,” she said. “We had some people who were running for governor like John McKeithen and then Fr. Deblanc.”
“If Fr. DeBlanc came,” Landreneau continued, “the house was full. We couldn’t keep up with the amount of tickets. I’d have some people sitting in the bar of the Evangeline Club waiting to see if I had a ticket for them because they wanted to hear Fr. DeBlanc.”
Over the years, Landreneau served as chairman of the Louisiana Cotton Festival and as the festival’s first historian. “All that time I would keep programs, papers, and newspaper clippings, and I started writing the history of the festival.”
“When Gary retired,” Landreneau continued, “he sold specialty advertisements, and he got a lot of samples. He wanted the closet space where my stuff from the Cotton Festival was, and he said that we were going to throw away all of that old stuff. I said no because I was going to write a book. I think he was quite shocked about that.”
Landreneau’s book that she wrote is called The Louisiana Cotton Festival 1953-1992. According to her, “Fr. Donald Hebert helped me with it. He saw about getting it all printed.”
The book was printed in 1992, and Landreneau wrote a second book that was printed in 2014 called The Louisiana Cotton Festival 1993-2013. “I went through the library there at the University of Louisiana,” she said. “Jane Vidrine and the lady that worked with her to put out the picture book set it all up for me.”
For Landreneau, two things make the Louisiana Cotton Festival unique from other festivals. The first is the running of the Tournoi, which led to the creation of the festival. “Marcellin Garand, the founder of Ville Platte, had brought the Tournoi here,” she said. “It was held in the 1880s for several years, and then it kind of died out for a good many years. Jules Tate had remembered it, and after World War II the veterans staged a Fourth of July celebration, so the first Tournoi in modern times was held in conjunction with the Fourth of July parade.”
“Then some of the people like District Attorney Herman Guillory, Jules Ashlock, Albert Tate, Jr., and Dallas Deville had heard that people were getting money from the state to stage a festival,” Landreneau continued. “So they said why not Ville Platte. By the time they got the charter for the Cotton Festival on August 20, 1953, it was too late to stage a festival for that year. They started working on it for the next year, but the Tournoi was still held. Audrey Guillory was the Tournoi champion and Dorothy “Dot” DeRouen was the queen.”
According to Landreneau, DeRouen rode down Main Street for the parade in a carriage that belonged to Toussaint L’Ouverture. “It was refurbished for that purpose, but unfortunately it was kept in a shed and burned,” said Landreneau.
Sixty-four contestants have since been crowned Queen Cotton, which, according to Landreneau, is the second reason that makes the festival unique. “The Queen gets a trip to the Washington, DC, Mardi Gras Ball,” she said. “Other queens from other festivals get on a rotation basis every five years, but our queen goes every year. That’s a good advertisement for Louisiana. They have a big dance, and they usually transport food.”
Landreneau’s involvement with the Louisiana Cotton Festival led to her being invited to Belgium in 1992. “There were some French teachers who came here, and one of them was very interested in the Tournoi,” she said. “He arranged for the Tournoi to be invited to Belgium to put on an exhibition at what we would call a state fair.”
Her involvement also led to her being named as parade marshal in 1993. “I enjoyed it, and I didn’t expect it,” Landreneau said. “My family came and went to the activities. Bernice Ardoin from The Gazette took my picture and wrote the article, and someone at the school board laminated it for me. I had it framed, and it’s hanging in my hall. It was an enjoyable experience.”
In the acknowledgements of her second book, Landreneau wrote the following: “I dedicate this book to all those who have ‘carried the ball’ of keeping the Louisiana Cotton Festival alive for the past 60 years. Another group of interested people always replaces those who retire.”