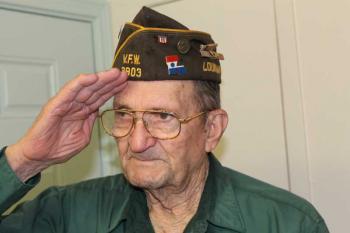 Iway Manual wears five ribbons and a combat star on his VFW cap. He joined the VFW in 1947.

Iway Manuel is among the dwindling ranks of World War II veterans. The Village de Memoire resident will turn 89 in September.
The Vidrine High School graduate joined the Army in 1943 when he was 18. His had basic training for four or five months at Camp Lee, Virginia, before heading to Seattle, Washington, where he got on a ship that sailed in a convoy, first to Pearl Harbor. Then the convoy went further west.
He served on the island where some of the most vicious fighting in the war took place -- Okinawa and the nearby island of Ie Shime. The battle ranged from early April to mid-June 1945 and resulted in the deaths of just over 14,000 Allied soldiers, over 77,000 Japanese soldiers’ deaths, either in combat or by suicide, and the deaths of perhaps even more civilians, many by suicide.
The island was less than 350 miles from mainland Japan, where military leaders were using suicide kamikaze pilots over Okinawa and surrounding seas in a desperate attempt to ward off the inevitable invasion of mainland Japan.
The fighting was still going on in the north part of Okinawa when he arrived. Japanese pilots would bomb the area where Manual’s company lived in tents, causing them to jump into foxholes. He was awarded five ribbons and a combat star due to his service in Okinawa.
Manual was wounded during an air raid but his duties, as important as they were to support combat operations, did not directly involve combat. It became clear as the war wore on that the combat troops and support personnel needed fresh bread and powdered milk to supplement their K rations and C rations. Manual’s company produced 38,000 pounds of bread while it was in Okinawa.
His company was still on Okinawa when the atomic bombs were dropped and Japan surrendered, less than two months after the end of fighting on that island. His company kept up with the news on a shortwave radio.
They had to wait about three months before they could get back to the U.S. The ship went through the Panama Canal, then past the Statue of Liberty at New York City, then up the Hudson River to a dock in New Jersey.
He was discharged in May 1946 in Mississippi and was soon back home. He smiles broadly as he recalled that. “It was beautiful,” he said.
He went to a trade school in Ville Platte before painting houses, applying wallpaper and installing sheet wall as his life returned to normal.
He and his late wife, Agnes, had three children, Sandra, Dennis and Kent. He says he has plenty of grandchildren “and now I’m a great grandpaw.”