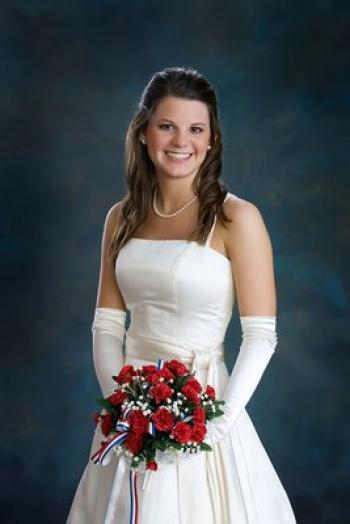 The theme of this year’s ball was “Saratoga 1777: The Tide Changes.” Serving as the master of ceremonies was Dr. Benton Cason de la Houssaye, Jr. of the Attakapas Chapter, LSSAR. Mrs. Frederick Marque de la Houssaye, honorary state regent, LSDAR, was marshal of the ball. She was also the choreographer of the event. The ball honored seven debutantes and seven young patriots whose ancestors took part in America’s fight for independence.

Among the seven debutantes chosen were two local girls, Layne Whitcomb Andrus and Tyler Elizabeth Andrus of Lafayette. They are the daughters of Mr. and Mrs. David Whitcomb Andrus.

Layne and Tyler are students of St. Thomas More Catholic High School of Lafayette. Their Revolutionary ancestor was John May of South Carolina. They were both sponsored by their mother, Michelle B. Andrus of Lafayette.

Following the presentation of the debutantes and young patriots, the formal portion of the program ended with the traditional cutting of the ceremonial George Washington birthday cake, which was rolled into the presentation are by the young Revolutionary descendants.