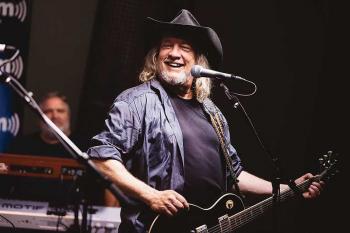 With his trademark syprury drawl, John Anderson admits that life on the road can be a challenge.
“Sometimes it is a bit of a grind,” Anderson said recently by phone. “Just getting out here was quite a challenge, but if someone took it away from me I would go crazy. I can’t foresee ever stopping.”
The 59-year-old country music legend is currently on tour to promote his latest album “Goldmine” and will be stopping off at Evangeline Downs in Opelousas on Saturday, Oct. 24, for his only Louisiana appearance. Tickets now on sale are between $15 and $40.
“We’re looking forward to coming back down to Louisiana,” Anderson said.
Anderson was born in Apoka, Fla., and grew up a fan of rock music from artists like fellow central Florida outfits Lynyrd Skynrd and Tom Petty and the Heartbreakers. He shifted to country after being exposed to the music’s towering figures George Jones, Johnny Cash and Merle Haggard.
Anderson moved to Nashville in 1972 and worked construction – including roofing the Grand Ole Opry House – before signing with Warner Bros. in 1977.
Anderson charted his first single on the Billboard Hot Country chart that same year with “I’ve Got a Feelin’ (Somebody’s Been Stealin’).”
Anderson would go on to record 22 studio albums and release 61 singles with six of those topping the charts.
Anderson became part of the new traditionalist movement in country music led by Ricky Skaggs, Keith Whitley and later George Strait, which placed an emphasis on the traditional vocal style and use of classic instruments like the steel guitar and fiddle.
From the smoke-filled honky tonks on Music Row in the 1970s to the sold-out stadiums and arenas where he headlined in the 1980s and 1990s, Anderson has taken the stage and performed for thousands.
“Every show is different,” Anderson said. “Every night is different, and every crowd is different.”
Night after night Anderson has heard audiences sing the lyrics to such country staples as “Swingin,” “Wild and Blue,” “Straight Tequila Night” and “I’m Just an Old Chunk of Coal (But I’m Gonna Be a Diamond Someday).”
That intimate interaction with strangers is a feeling like no other, he said.
“That is part of the big reward of being an entertainer or performer,” Anderson said. “To have people know every word to one of your songs that is what a lot of us are trying to do. It is like hitting a grand slam during a Little League game.”
With nearly 500 songs in his impressive music catalog, Anderson sometimes is unable to handle all the requests from his die-hard fans.
“Sometimes someone in the crowd will holler out one of those songs you have forgotten altogether,” Anderson laughed.
Anderson also admits that his shows are not nearly as rowdy as maybe they were 25-30 years ago.
“I am not for sure if it is me or the crowds, but one of us has gotten more tame over the years,” laughed Anderson.
With his classic sound and songs, Anderson is one of the more revered living country artists as evidenced by his induction into the Nashville Songwriters Hall of Fame in 2014.
So where does he stand on the state of modern country music, with its departure from the traditional sounds and song structure that Anderson and others prided themselves on keeping alive?
“I care, but it’s not really my thing,” Anderson said. “I am into my own thing. I worry about my music and my songs. I do hope they don’t forget the traditional sounds of country music. But to be honest there isn’t a lot I can do about that.”
What Anderson can do something about is the time he spends on the road. Yet despite the challenges of touring and nearing retirement age, Anderson isn’t planning on putting the tour bus in the barn anytime soon.
“I never really wanted to do anything else as an occupation,” Anderson said. “I am very blessed, but you never guess that you’ll be around 40 years on the road. I will probably do it until I fall over and I can’t do it anymore.”