No justice; no peace 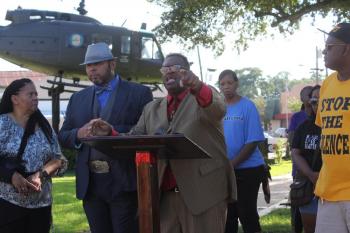 Reverend Raymond Brown (center) delivers a passionate message to an audience outside of the Evangeline Parish Courthouse on Wednesday. The civil rights leader came to Evangeline Parish to seek justice for an individual recently killed during a deputy-involved shooting. (Gazette photo by Elizabeth West)

The Evangeline Parish Courthouse lawn was filled with parish residents urging that justice be served in what the group consider the uncalled for death of Dejuan Guillory at the hands of an Evangeline Parish Sheriff’s Deputy.
During the gathering, the crowd heard from a variety of civil rights leaders from the NAACP and the New Black Panther Party in Houston, Texas.
At the news conference and gathering, Reverend Raymond Brown, shouting “no justice, no peace,” approached the podium to address what he feels has created the issues black communities face with cops.
“The government sets up these cops to get killed because not everybody is peaceful,” said Brown.
He then continued, “If a group of people continue to be oppressed and killed constantly and the criminal justice system is not working, they will eventually defend themselves.
“It is wrong to go out and shoot innocent cops sitting in their car. However, the revolutionary don’t feel that way. They think we are joining a war, and they feel that in a war you go out and get your enemy.”
Brown did clarify during his speech that not all cops are bad, but the actions of one cop he said could affect them all.
Before closing out his speech Brown urged the leaders of Evangeline Parish to prosecute the deputy that shot and killed Guillory during an altercation between the two last Thursday.
Brown said, “I want to warn the D.A. and judges and those with power to prosecute that no good racist scum because these cop’s lives are in danger over this one cop’s killing.”
The crowd also heard from Margie Broussard with the NAACP during the gathering.
Broussard said, “There is a system that was not created for us, it was not created by us, and it was never meant to protect us.
“We need to galvanise ourselves and go where the laws are being made and get those laws changed.”
Broussard then went on to say, “We are such a reactionary people. My people I love you, but we have to stop being reactionary. We have to be in it for the long hall.
“The road to justice is not a smooth road. It’s not without bumps and lumps and jaged edges. The road to justice it covered with tears and blood of our people. But, I am confident, that together we can walk that road to justice and we can bring change for our people, our children, and our children’s children.”
The gathering came to a close with the crowd of people joining hands in a circle, where they then prayed together.
On Monday, La. State Police released more information concerning their investigation into deputy-involved shooting that claimed the life of Guillory.
According to state police, “At approximately 04:10 a.m., the Deputy was dispatched to a reported theft of an ATV and subsequently cleared that call.”
State police say that “upon resuming patrol and still within the nearby area, the Deputy made a traffic stop on a 4-wheeler (ATV) on Retton School Rd @ Chad Ln.”
During the traffic stop the deputy came in contact with Guillory, who was driving the ATV, and Dequince Brown, who was a passenger.
According to police, the “deputy asked Guillory and Brown for legal identification, which neither possessed.”
During their initial interaction, “Guillory struck the deputy in the head, knocking him to the ground, dazing him with a possible loss of consciousness.”
State police say that the “deputy was able to rise to his feet, draw his firearm and gave verbal commands for Guillory to lie on the ground.”
According to police, “Guillory laid down on his stomach and the Deputy attempted to handcuff Guillory.”
While attempting to handcuff Guillory, “a struggle ensued .”
State police say, Brown then “approached the deputy form behind and began to choke and bite him.”
During the struggle with both Dequince and Guillory, “the deputy shot Guillory with his duty weapon.”
State police say that “evidence from the crime scene indicates that a handcuff was only applied to Guillory’s right arm,” and “the handcuff was significantly damaged and had to be cut off post autopsy.”
They also say that “it should be noted that the patrol vehicle was equipped with an in-car camera system, which state police has in its possession and will be conducting analysis of the device.”
Dequince was arrested in connection with this crime for attempted first degree murder of a police officer.
She was however released from jail on Tuesday on a $75,000 bond.