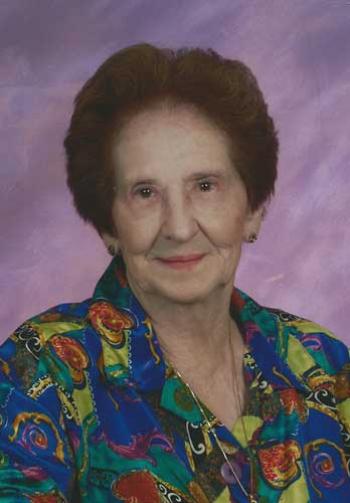 September 24, 1916 - January 24, 2014
Funeral services will be held for Altha Marie Doucet, 97, of Ville Platte, at the Ardoin’s Funeral Home Chapel in Ville Platte at 11 a.m., Saturday, January 25. Burial will follow in the Old Ville Platte Cemetery.
A devoted mother, grandmother and great-grandmother, Ms. Doucet died Friday, January 24, 2014, at her residence surrounded by members of her beloved family. She was a kind and compassionate soul. She not only devoted her life to the care and well being of her family, she also devoted a great deal of her life to the care and well being of others. Her calling was the profession of nursing, and she was one of the first home health nurses in Evangeline Parish. She also worked at Attaway Hospital, Ville Platte General and our local nursing home. She faithfully served others until the age of 77 years. Only because of her own ailments would she give up her devotion to care for the sick and feeble.
Survivors include three children, Dale Doucet and his wife, Mary Ann, of Opelousas, Mark Doucet and his wife, Mindy, of Ville Platte and Maxine “Pudge” Doucet of New Orleans. Her memory will forever remain in the hearts of her five precious grandchildren and her seven great-grandchildren. They were her greatest joy.
She was preceded in death by her beloved husband, Allen Doucet; her parents, Oscar and Louise Duplechain; and three brothers, Walter, Warren and Leroy Duplechain.
Father Joe Breaux will officiate.
Family and friends may view the online obituary and/or sign the guestbook at www.ardoinfuneralhomes.com.
Ardoin’s Funeral Home of Ville Platte will be in charge of arrangements.