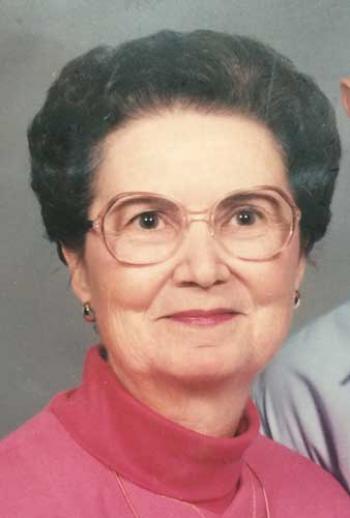 February 16, 1938 - July 26, 2015
Funeral services were held for Delores Pitre Chapman, 77, of Belaire Cove, at Sacred Heart Catholic Church in Ville Platte at 4 p.m., Tuesday, July 28. Burial followed in the B.J. Fontenot Cemetery.
Mrs. Chapman died Sunday, July 26, 2015, at Heritage Manor Nursing Home in Ville Platte. Working in her flower beds, sewing, embroidering and baking for family and friends were among the many things she enjoyed doing. Her greatest love was that of spending time with and making a happy home for her beloved husband, Rayford John Chapman. Their 57 years of married life together will provide him with many cherished memories.
Survivors include her husband, Rayford John Chapman of Belaire Cove; her brother-in-law, Eldon Chapman and his wife, Margie, of Belaire Cove; three nieces, Phyllis Fontenot and her husband, Tony, of Duson and Kerria Soileau and her husband, Grant, and Cheryl LeBas and her husband, Mackie, all of Ville Platte; and two nephews, Errol Chapman and Andrew Chapman and his wife, Cathy, all of Belaire Cove.
She was preceded in death by her parents, Madison and Elna Fontenot Pitre.
Father Tom Voorhies officiated.
Family and friends may view the online obituary and/or sign the guestbook at www.ardoinfuneralhomes.com.
Ardoin’s Funeral Home of Ville Platte was in charge of arrangements.