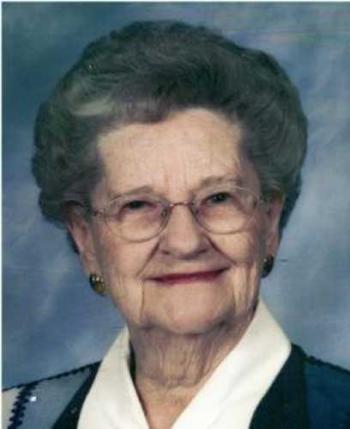 October 2, 1916 - September 9, 2014
EUNICE - Funeral services will be held for Esmee B. Penn, 97, of Eunice, at St. Anthony Catholic Church in Eunice at 2 p.m., Friday, September 12. Burial will follow in the Mt. Calvary Cemetery.
Ms. Penn died Tuesday, September 9, 2014, at Our Lady of Lourdes Regional Medical Center in Lafayette. She worked at Pitre and McBride Jewelry Store for many years until retirement. She was a faithful and devoted member of the Catholic Daughters for over 65 years and was the Catholic Daughter of the Year in 1961, as well as a member of the Pink Ladies for many years. In her earlier years, she was a seamstress for the public and ran a bakery out of the front room of their home. In addition to this, she enjoyed crocheting and playing in a pokeno group for most of her life. She will be remembered as a wonderful mother, grandmother and all around friend to everyone who knew her. She will be greatly missed by all.
Survivors include two sons, George R. Penn and his wife, Jennifer, of Ville Platte and Jack “Mitch” Penn and his wife, Jan, of The Woodlands, Texas; four daughters, Ann C. Frey and her husband, Rodney, of Lake Charles, Jennifer Tucker of Hot Spring Village, Arkansas, Kaye Wade and her husband, Jim, of Cankton and Melinda Penn of Lake Charles. She was blessed with 13 grandchildren, 15 great-grandchildren and five great-great-grandchildren.
She was preceded in death by her husband, Caffery Penn; and her parents, Octave and Marguerite Faucheaux Boudreaux.
At the request of the family, visitation will be held at Ardoin’s Funeral Home in Eunice on Friday, September 12, from 10 a.m. until time of service. A Catholic Daughter Rosary will be recited at 11 a.m.
Msgr. Robert Romero and Father Matthew Barzare will officiate.
Family and friends may view the online obituary and/or sign the guestbook at www.ardoinfuneralhomes.com.
Ardoin’s Funeral Home of Eunice will be in charge of arrangements.