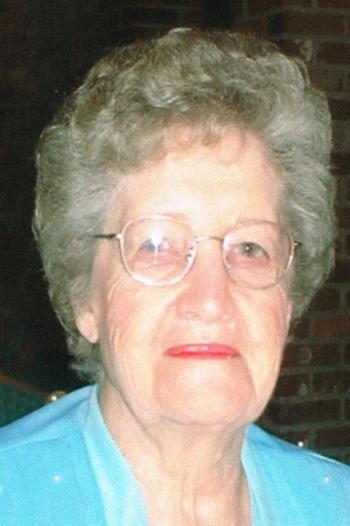 Feb. 26, 1920 - Oct. 17, 2016
Funeral services for Hilda Berzas Thompson will be held on Saturday, October 22, 2016 at 12 p.m. at Ardoin’s Funeral Home Chapel in Mamou. Reverend Father Thomas Voorhies will officiate the service. Interment will immediately follow at Platin Cemetery on Miller’s Lake Road in Ville Platte. Visitation will be from 11 a.m. to 10 p.m. on Friday, October 21, 2016 at Ardoin’s Funeral Home in Mamou. A rosary will be recited at 6 p.m.. The funeral home will reopen at 9 a.m. on Saturday, with visitation until time of service.
Thompson, 96, passed away Monday, October 17, 2016.
Known affectionately as Ms. Blonde, Berzas was born and raised in Mamou. She grew up learning the value of hard work, perseverance, and commitment. In her adult life, she instilled these traits in her loved ones, and as the matriarch of her family, that is the legacy she left behind. She was incredible at gardening, cooking, baking, quilting, and sewing, and she especially loved baking and sewing for her grandchildren. She enjoyed playing cards, especially bourre, and listened to her Cajun music every Saturday morning on KBON. She was a beautiful soul with a canaille eye, and she will be missed terribly.
Berzas was preceded in death by her husbands, Littell Thompson, Chesley Fontenot, and Amson Deshotel; her parents, Paul Berzas and Camille Israel Berzas; her brothers and their spouses, Clement and Mila Berzas Edley and Maris Berzas, Pierre and Zella Berzas, Maurice and Armide Berzas, and Kenneth and Virginia Berzas; her sister and her spouse, Verna and Ray Guillory; four nephews; and one niece.
Survivors include her daughters, Carrie Thompson Soileau, Jackie Thompson Duos, and Barbara Thompson Vidrine; her sons-in-law, Joseph Donald Soileau, Robert Duos, and Dana Vidrine; grandchildren and their spouses, Blake Soileau, Chad Soileau, Rachel Soileau Davis, Paul Davis, Robin Vidrine Tabb and Ryan Tabb, Ashley Vidrine Lancon and Kevin Lancon; two great – grandchildren, Brock and Peyton Davis, and one step great grandchild, Hunter Tabb; two nieces, Freida Guillory Tate and Roxanne Guillory; and two nephews, Vorance Berzas and Rayford “Blackie” Berzas.
In lieu of flowers, memorial contributions may be made to American Heart Association or Epilepsy Foundation of Louisiana.
Ardoin’s Funeral Home in Mamou is in charge of arrangements.