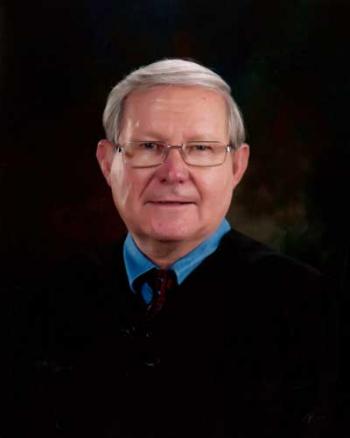 June 21, 1946 - March 15, 2015
ELTON - Funeral services were held for Judge James R. McClelland, 68, of Franklin, at the Church of the Assumption of the Blessed Virgin Mary in Franklin at 11 a.m., Wednesday, March 18. Burial followed in the China Cemetery in Elton.
Judge McClelland died Sunday, March 15, 2015, at his residence surrounded by his loved ones after a courageous battle with ALS.
Judge McClelland was born on June 21, 1946, in Eunice, the son of Rufus Ray McClelland and Florene Nunn McClelland. He was raised on a rice farm in Elton, where he graduated as valedictorian of his Elton High School class in May of 1964. He went to LSU, where he earned a chemical engineering degree in 1969, an MBA in 1971 and a Juris Doctor degree from LSU Law School with honors as a member of Order of the Coif in May 1975. He was a member of the Louisiana Law Review. He was in the ROTC program at LSU for six years and served three months active duty in the U.S. Army. He was an avid LSU fan, having had season tickets for the past 40 years for football, baseball, basketball and softball.
Having been admitted to practice before the Louisiana Supreme Court in October 1975, he was also admitted to practice before the U.S. District Courts for Eastern and Western Districts of Louisiana. He and his wife of four years, Sandy Tate McClelland, then moved to Franklin, where he practiced law from 1975 - 2009 with the law firm of Aycock, Horne and Coleman, where he became a partner in 1978. He was also the founder of the Public Defender Board and served as a public defender from 1975 - 1981, and an assistant district attorney in the 16th Judicial District Court from 1981 - 2008, when he was elected judge for the 16th Judicial District Division D and took office on January 1, 2009. In addition to his regular duties, Judge McClelland also presided over the St. Mary Parish Adult Drug Treatment Court and DWI court and Juvenile Drug Treatment Center for four years. He was active with the Louisiana State Bar Association from 1982 - 2005, where he served in the House of Delegates, Board of Governors and as secretary of the LSBA. He was a charter member of the American Inns of Court-Inns on the Teche, having served as president from 2010 - 2011 and received the Professionalism award from the Inns in 2012.
Judge McClelland served as a member of the Board of Directors of the Louisiana Bar Foundation.
Judge McClelland, sometimes known as “Coach” to many of the young people he coached in pee wee football, little league baseball and biddy basketball, as well as Hanson’s girls basketball, enjoyed many years of mentoring and leading young people in the Franklin community.
Judge McClelland belonged to many civic, religious and professional organizations, including the Church of the Assumption, Morgan City and Iberia Bowling Leagues, Honor Society of Phi Kappa Phi at LSU in 1975 and board of directors of the Franklin-Baldwin-Centerville Chamber of Commerce. He served as St. Mary Parish Council Legal Advisor from 1997 - 2009. He also served as a member of the Governor’s Advisory Board of Juvenile Justice and Delinquency Prevention under Governor Murphy J. “Mike” Foster Jr. from 1997 - 2004. He was inducted into the Morgan City USBC Bowling Association Hall of Fame on May 18, 2013. He was named as one of the national directory of Who’s Who in Executives and Professionals from 1996 - 1997, Strathmore’s Who’s Who lifetime member and the Marquis Who’s Who Publication Board Who’s Who in America.
Survivors include his wife of 44 years, the former Sandra Tate, of Mamou; two sons, Joseph Ray McClelland and his wife, Hope Henry McClelland, of Gray, Jeffrey Ross McClelland and his wife, Danielle Landreneau McClelland, of Lafayette; two young women who became daughters to him, Jamie Young Smith of Duson and Jodie Dardeau and her husband, Daniel Dardeau, of Carencro; four grandsons, Noah, Alexander and Ren Dardeau, all of Carencro, and Ryder McClelland of Gray; seven granddaughters, Hattie and Eliza McClelland of Lafayette, Carlynn Henry and Gracie Bourg of Gray, Eden Dardeau of Carencro and Chloe and Hannah Smith of Duson; one brother, Thomas “Tommy” McClelland and his wife, Patsy Toups McClelland, of Elton; his mother-in-law, Carina “Sue” Vasseur of Mamou; one aunt, Louise “Sammie” McClelland of Elton; as well as numerous nieces, nephews and cousins that he was greatly fond of.
He was preceded in death by his father, Rufus Ray McClelland; his mother, Florene Nunn McClelland; as well as his father-in-law, Fred Tate.
Pall bearers were his nephews, Drew and Jack McClelland, Mark Carriere and Chad Veillon, as well as Edward LeBlanc and Brady Holtzclaw. Honorary pall bearers were Julie LeBourgeois, Tommy McClelland, Cliff Dressel, Sidney Hebert, David Harris, Vincent Borne, Larry Deslatte, Jimmy Senatte, Andy Reed, Carroll Fuselier, Gerry Block, Lyle Simoneaux, Matt LeBlanc and John Freshley.
The family wishes to especially acknowledge the judge’s beloved caregivers, Chris Gatte, Melvina Morris, Ydell Washington, Ginger Jones, and Ramona Benjamin, as well as Journey Hospice of Houma, especially Ginger Guidry and Amanda Brewer. Special thanks to Dr. Stephen Kantrow of LSU Health Services ALS Clinic in New Orleans and Dr. Brent Allain of Franklin.
In lieu of flowers, donations are requested to be made to the Louisiana-Mississippi Chapter of the ALS Association or to the Hanson/St. John Foundation FBO James R. McClelland fund, 903 Anderson Street Franklin, La. 70538.
Father Michael J. Russo, Father Lloyd Benoit and Rev. O’Neal Landry officiated.
Family and friends may view the online obituary and/or sign the guestbook at www.ardoinfuneralhomes.com.
Ardoin’s Funeral Home of Mamou was in charge of arrangements.