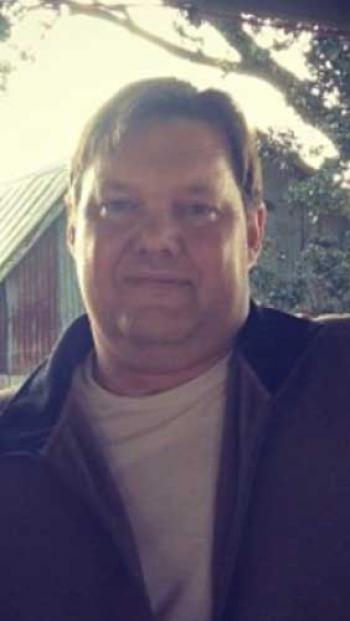 JED ANTHONY OLIVIER
May 14, 1966 - October 12, 2015
A memorial service will be held for held for Jed Anthony Olivier, 49, of Breaux Bridge, at St. Aloysius Church in Baton Rouge at 6 p.m., this evening, October 14. A visitation will be held at the LaVille Funeral Home Chapel in Ville Platte on Thursday, October 15, from 5 p.m. until 7 p.m., with a rosary at 6:30 p.m.
Mr. Olivier died Monday, October 12, 2015, at Our Lady of the Lake Hospital in Baton Rouge. He was born and reared in Ville Platte and was a long time resident of Baton Rouge before finally residing in Breaux Bridge.
He was an avid outdoors man and always loved going back to “God’s country” in Ville Platte to escape the city and enjoy hunting, fishing, visiting with his parents at their grocery store and performing various farming activities.
As a young adult, he was most proud of his crawfish business, where he fished and sold crawfish from his parents’ farm property.
His fondest and most proud memories are being with kids and helping coach them through all their sports during their elementary and middle school years. He also loved going to his camp and jet-skiing, riding 4-wheelers, fishing, and being on the river with his kids.
He attended Sacred Heart School in Ville Platte from kindergarten through the 12th grade, then went on to attend ultrasound school at Charity Hospital in New Orleans. He worked as a urosonographer for many years for several urologists in Baton Rouge and for Our Lady of the Lake Hospital, then spent his last 19 and a half years with Abbott as a senior executive sales representative. He was outstanding at his job and often found himself within the top five percent of his company, winning Excalibur for seven years, along with numerous other awards. He traveled to Japan, Hawaii on two occasions and the Bahamas, as well as various other destinations within the U.S. during his time with Abbott.
He was also an avid LSU fan and enjoyed tailgating and going to football games when not at his camp. Football was the only reason he missed opening season.
He always believed that his best times were behind him and that it was time for his kids to have their best times while he admired them in their spot lights. They’ll be many more times to watch and admire them from above as they will forever carry you in their hearts.
Survivors include his mother, Mercedes Rozas Olivier of Ville Platte; one son, Christopher “Austin” Olivier of Baton Rouge; one daughter, Caroline Elizabeth Olivier of Baton Rouge; and his ex-wife, Christine Linarello Olivier of Baton Rouge. He is also survived by his five siblings, Steven Olivier and Jude Olivier and his wife, Dana Olivier, all of Baton Rouge, Lynn Olivier Fontenot and her husband, Tommy, and Patti Olivier Fontenot, all of Ville Platte, and Francis “Todd” Olivier of Lafayette; one sister-in-law, Dolores Olivier of Ville Platte, wife of the late Charles “Craig” Olivier; and several Godchildren, nieces and nephews in the Baton Rouge, Ville Platte and Acadiana area.
He was preceded in death by his father, Joseph “Leroy” Olivier; and one brother, Charles “Craig” Olivier.
In lieu of flowers, please make donations to St. Jude Children’s Hospital.
The guest book can be signed online at www.lavillefuneralhome.net.
LaVille Funeral Home of Ville Platte is in charge of arrangements.