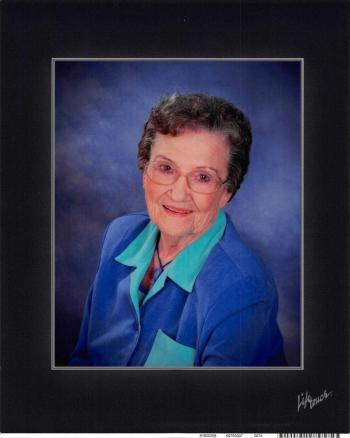 February 10, 1926 - February 5, 2016
Funeral services were held for Mercedese T. Lafleur, 89, of Ville Platte, at Sacred Heart Catholic Church in Ville Platte at 10 a.m., Monday, February 8. Burial followed in the Sacred Heart Mausoleum.
Ms. Lafleur died Friday, February 5, 2016. She was a devoted parishioner of Sacred Heart Catholic Church, where she was a member of the Catholic Daughters and cherished her time in the Adoration Chapel. She was known for her cooking, baking and gardening. Her greatest joy was that of being a loving mother to her three daughters.
Survivors include three daughters, Janice Brignac and her husband, William “Billy,” Shurlene Fruge and her husband, Wayne, and Tina Saucier and her husband, Kent, all of Ville Platte. Her memory will be cherished by her six grandchildren, Trent Brignac, Ryan Brignac, Mitzi LeJeune, Marti Pitre, Haley Hollier and Lindsey Kinney; and her 11 great-grandchildren.
She was preceded in death by her husband, Joseph Harrison Lafleur; her parents, Orterre and Edvise Deshotel Thompson; three sisters; and one brother.
Father Tom Voorhies officiated.
Family and friends may view the online obituary and/or sign the guestbook at www.ardoinfuneralhomes.com.
Ardoin’s Funeral Home of Ville Platte was in charge of arrangements.