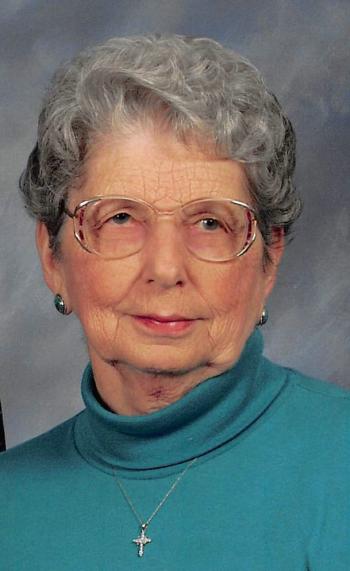 Feb. 5, 1927 - Dec. 30, 2016
VILLE PLATTE – A Mass of Christian Burial was held Tuesday, January 3, 2017 for Verna Guillory Demoruelle at Our Lady Queen of All Saints Catholic Church. Father Mitch Guidry officiated the service. Burial followed at Gates of Heaven Cemetery.
Demoruelle, 89, passed away on Friday, December 30, 2016 at her residence.
Heaven’s Big Band will be swinging as Verna and Owen dance in the New Year together.
Born to Odey and Aureline Mayeux Guillory, she grew up in the Vidrine community. Although vision-impaired from birth, she would not be limited in her accomplishments. She graduated from Tennessee College for Women, Murfreesboro, Tennessee, majoring in music. Later she earned her education degree at SLI. Demoruelle shared the gift of music with thousands of students, having taught at Sacred Heart Catholic School, Chataignier High School and Ville Platte Lower Elementary School. After retiring from the school system, she taught private lessons in her home until last year. She also used her creative skills at sewing and knitting.
She married Owen Demoruelle in 1953. Their shared love of music and dance brought many hours of joy to their home. The greatest gift they gave to their four daughters was their faith in God.
She is preceded in death by her husband of 62 years, Owen Demoruelle; parents, Odey and Aureline Mayeux Guillory; and brother, Hal Guillory.
Demoruelle is survived by her daughters, Debora Hamilton and husband, Kern, Nanette Bell and husband, Randy, Libbye Melancon and Laura Launey and husband, Byron; sister, Beryl Day; grandchildren, Daniel Morgan, Holly Walker, Jacob Melancon, Mathew Bell, Marcus Launey, Andrew Bell and Olivia Launey; and great-grandchildren, Max Morgan, Annalise Melancon, Lauren Walker, Rosalee Melancon, Michael Walker and Thomas Walker.
While flowers are being accepted, the family suggests a donation may be made in her memory to a music program of your choice or LHC Hospice.
Ardoin’s Funeral Home of Ville Platte was in charge of arrangements.