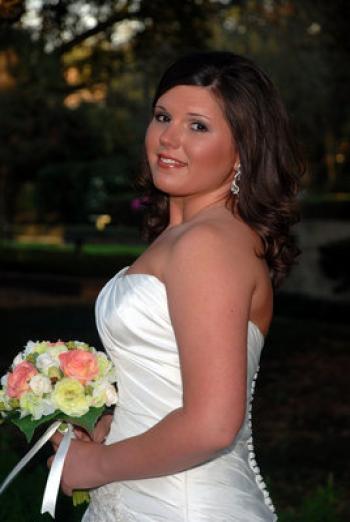 Rachael is a 2001 Notre Dame High School graduate, 2005 ULL graduate with a bachelor of science degree in professional land and resource management and is a member of Delta, Delta, Delta sorority. She is currently employed as an independent petroleum landman.

Kyle is a 1997 graduate of Welsh High School and is currently employed as an inside salesman for Louisiana Rents in Lafayette.

The bride, escorted by her father, was radiant in a Casablanca creation featuring a strapless sweetheart neckline, a-line silhouette, and chapel train in a diamond white silky taffeta. There were asymmetrical gathers on the bodice and skirt with dazzling bead-work used at the dropped waist and self fabric beaded buttons ran the full length of the back of the gown. She wore a triple layered diamond white elbow length veil. Her bouquet contained varying shades of cream and pink sweet unique and sweet akito roses with cream and green hydrngeaas, apple green hypericum berries and lemon leaf. It was hand-wrapped and french tied with white satin ribbon, tucked into the bouquet was a linen and lace handkerchief purchased the year of the bride’s birth by the bride’s paternal grandmother, Mrs. Marie Broussard Smith, to be used by the bride for her wedding.

A sixpence, given to the bride by her godfather, Kerry Stutes, was placed in the bride’s shoe.

Ushering guest to their seats were Christopher Laughlin, cousin of the bride; Jeremy Murry, and Scott Duhon, both friends of the groom.

Flower girl was Brilee Cox, stepdaughter of matron of honor Colleen Craton Cox and daughter of groomsman Brain Cox. She was attired in a white Dupioni silk sleeveless gown adorned with a black silk sash. She carried a pomander of pink mini carnations, leather leaf, and sweetheart porcelina roses. Serving as ring bearer was Jinsi Bourque, nephew of the groom.

Scripture readings were given by Kim Lopez, sister of the groom and Lisa Angelo.

Musical selections were provided by Alberta Lyons, organist; Tommy Benoit, violinist; and Neil Simon, trupeter. Songs included Schubert’s “Ave Maria” for the entrance of mothers and grandmothers. Attendants entered to “Canon in D”. The bride and her father entered to “Trumpet Voluntaire”, and the recessional was to “Rondeau”. “The Lord’s Prayer” was sung in French by Father Ben Drapeau following the bride’s and groom’s vows.

On her daughter’s special day the mother of the bride was lovely in a three-piece full length mocha gown with bronze accents.

The mother of the groom was beautifully attired in a two-piece navy tea length dress with navy iridescent accents. Both mothers were presented with corsages of sweetheart porcelina roses and green hypericum.

The bride’s cake was an alternating square and round four-tiered white butter cream confection featuring strawberry mousse, pineapple with white chocolate, chocolate mousse with fudge, and lemon cheesecake fillings and was atop an exquisite silver plateau. The cake was served by the bride’s godmother, Debbie Stutes and Donna Laughlin, aunt of the bride.

The groom’s cake was a strawberry and chocolate flavored replica of the LSU football stadium complete with working lights, which carried out a tailgating theme and was served by Cathy Kendall and Marie Fusilier, aunts of the groom.

Following the wedding ceremony, the newlywed couple was honored with a reception held at Le Centre De Pere Daigle in Welsh.

Upon returning from a wedding trip, the couple will reside in Jennings.

A rehearsal dinner hosted by the groom’s parents was held at Walker’s in Jennings, on the evening of March 28.