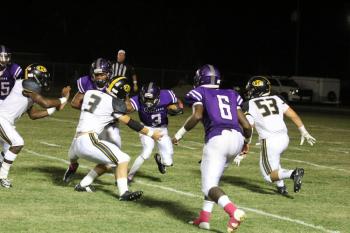 GONZALES -- In a weather shortened game, the Ville Platte High Bulldogs scored all of the points necessary in the first one and a half quarters, as they rolled past the Ascension Christian Lions 33-0 here Friday night.
With the win, Ville Platte is now 3-6 on the year and will host the Welsh Greyhounds this Friday night in the regular season finale.
The game between the Bulldogs and the Lions did not last past the second quarter, as lightning and rain forced a decision by the two head coaches to cancel the remainder of the contest.
“About half way through the second quarter we had lightning in the area and the referees sent us to the locker room,” stated Ville Platte head coach Jorie Randle. “After a long wait, the head coach for Ascension Christian and myself got together and decided to cancel the rest of the game. Basically, he forfeited the game to us.”
“But, we were up 33-0 at the time and we would have had to drive back tomorrow (Saturday) to finish the game,” Randle continued. “One of the factors in the decision was that they are not playing for any district honors or to make it to the playoffs because this is their first year in the LHSAA.”
Ville Platte wasted no time in putting the Lions away. After getting the ball at their 11-yard line to start their first offensive series, the Bulldogs drove 89 yards in five plays and used up a total of 2:14 seconds to put the first points on the board.
The drive was capped off by a 33 yard run from running back Jaishaun Doucet. The extra point failed, giving Ville Platte a 6-0 lead with 8:07 left to go in the first quarter.
Just over a minute later, the Bulldogs took over possession once again at the Lion 33-yard line. The result of this drive was very similar to the first scoring drive, as Ville Platte needed only three plays to go the entire 33 yards to hit pay dirt.
It was Doucet once again that put the exclamation point on the possession, as he scooted in from five yards out. Doucet then ran it in for the two-point conversion putting the Bulldogs up 14-0 with 5:44 left to go in the opening quarter.
Ascension Christian was able to move the ball from their 37-yard line down to the Ville Platte 41-yard line in five plays on the ensuing possession. However, the Bulldogs buckled down defensively and forced an incomplete pass on a fourth and eight situation.
Ville Platte took over on offense and showed off their quick strike offense once again, as Eligia Charles raced 59 yards for the score on the first play of the drive. The two-point pass play was not completed and Ville Platte now owned a 20-0 lead with 2:43 left in the first period.
The Bulldogs got the Lions to punt the ball away on the next possession and took over at their 49-yard line. After six plays, Ville Platte faced a second and two on the Ascension Christian 24-yard line, as the game spilled into the second quarter.
On the very next play, quarter back Brandon Veazie found Keenan Markary for a 24 yard pitch and catch that put the Bulldogs on the board once more. The kick failed, but Ville Platte had extended the lead to 26-0 with 10:38 remaining in the second quarter.
The final Bulldog touchdown came 3:35 seconds later when Veazie kept it for a two-yard score. This time the extra point was true, putting Ville Platte ahead 33-0.
Ascension Christian got one more possession before the weather forced the game to be called.
Charles led all Ville Platte rushers with 149 yards on five carries and one touchdown.